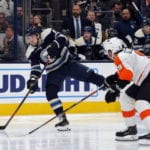 Edmonton Oilers: The Oilers have signed forward Adam Cracknell to a one-year, two-way contract for the 2020-21 season. Cracknell recorded 10 goals and 14 assists in 52 games for Kunlun Red Star of the KHL last season.

Puck Pedia: The Tampa Bay Lightning have signed right-handed defenseman Alex Green to a two-year entry-level contract. He was a 2018 fourth round pick. He’ll carry a $817,500 salary cap hit with a $925,000 AAV.

Frank Seravalli of TSN: Sources have said that six of the seven Canadian teams have reduced the pay for staff members, with the Toronto Maple Leafs as the only team that hasn’t. There are at least 17 teams who have cut salaries.

The Ottawa Senators initially reduced pay by 50 percent. Their coaching staff appealed to the NHL and they received full pay retroactive to July 13th.

League employees who are/were working in the bubbles are at a 25 percent reduced pay.

The Sabres took a 20 percent cut from April to July 13th, and then turned down a 25 percent reduction request. The Sabres also fired 22 staff back on June 16th. The Sabres may also have an internal salary cap in the low $70 million range.

Bill Meltzer: Philadelphia Flyers GM Chuck Fletcher said that they will have to work through the contract process with the agent for pending restricted free agent forward Nolan Patrick. They haven’t started focusing on that just yet. Their goal has just been working on getting him healthy.

Sam Carchidi: GM Fletcher hints that they may be interested in bringing back pending unrestricted free agent goaltender Brian Elliott.

Fletcher says that Elliott has the respect of his teammates and the organization. Fletcher has already started contract talks with his agent.

“… all trade speculation around Josh Anderson should be on hold, at least temporarily. The Columbus Blue Jackets first need to find out what his expectation is contract wise. Anderson would like to stay in Columbus, but he needs a long-term deal to do that. Jarmo Kekalainen may not have the stomach for that which might fuel more Anderson trade speculation.”