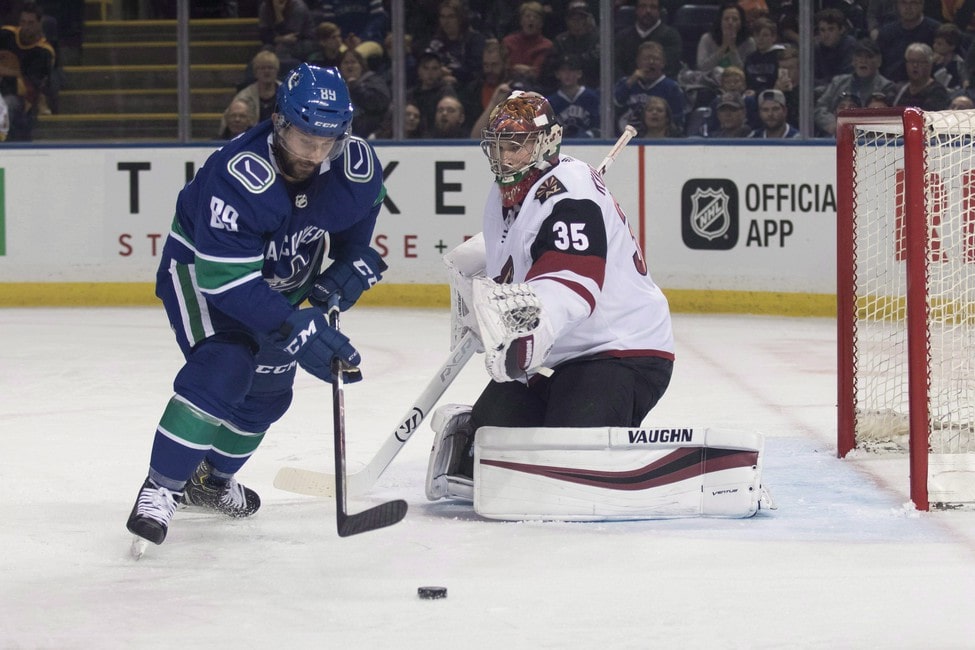 According to a number of reports, the Edmonton Oilers have shifted focus away from Matt Murray of the Pittsburgh Penguins and towards goaltender Darcy Kuemper of the Arizona Coyotes.

As the Oilers continue to gather information, trying to make the best possible decision for next season’s goaltending tandem as possible, Elliotte Friedman noted on a recent episode of The Instigators podcast, the Oilers and Kuemper might make sense. Friedman acknowledged that he’d heard Oilers GM Ken Holland had been kicking tires on Murray. But, as the asking price of a first-round pick made its way back to Edmonton, the Oilers determined that was too rich for their blood.

So, if this report is accurate, what exactly does that mean?

One would have to assume the Coyotes are going to ask for a first-round pick if a team is going to shake Kuemper loose. As they should. He had a fantastic season and an incredible playoff run before, as Friedman notes, “he ran out of gas” against Colorado.

If the Oilers balked at a two-time Stanley Cup winner in Murray, there must be something they see in Kuemper that they really like. He’s four years older, which at first glance might not be a positive. But, if you factor in the idea that Holland likes “pros” and isn’t shy about adding veterans to his roster, 30 is by no means too old. He’s also played well on some not-so-great teams.

Unlike Murray, who has been the backstop of a consistent contender, Kuemper has put up some good numbers on teams that have struggled. He spent some time with the Minnesota Wild, then a couple years removed from their Stanley Cup win, he was a backup in Los Angeles. He then moved over to the Coyotes. All the while, he put up a consistent save percentage well above. 900. He seemed to play ever better the more he got starts.

Oilers Have a Few More “Knowns” in this Equation

Unlike Murray, there are few extra things Edmonton knows in talking to the Coyotes when it comes to Kuemper.

First, the Oilers know what the value of Kuemper will be for the next couple of years. He’ll be making $4.5 million this coming season and next, then he’ll be up for unrestricted free agency. If it’s a deal that doesn’t pan out as hoped, Edmonton isn’t committed long term. If he plays great, the Oilers can try to extend him as their starter and get a back-up to play behind him as their 1B.

Conversely, the Oilers would have had to trade for Murray and then sign him which could have posed financial challenges.

Second, the Oilers know that Arizona needs picks and may take salary back. The Penguins weren’t looking at money coming back in any Murray deal. That much was obvious after the team essentially gave Nick Bjugstad away to the Minnesota Wild on Friday. But, the Coyotes have cap space.

There is value in Edmonton being able to grab a goalie and move out salary versus grab a goalie and have to make multiple separate deals with other teams. A perfect example that comes to mind is Kris Russell who is an ideal fit for Arizona. He makes more on his cap than he’s actually paid. If the two sides get creative, there’s likely a way to work him into what could be part of a bigger, more complex deal.

The Oilers Will Still Have Challenges

There are a lot of reasons to argue Keumper makes a lot more sense than Murray for the Oilers but that doesn’t mean either deal comes without challenges. Adding either player means the Oilers have $9 million or more tied up in the goaltending. That’s not ideal.

Adding Kuemper could require the team moving out Mikko Koskinen and then the overall set of moves becomes a situation where the Oilers need to come out net positive when everything is done.

Remember, adding Kuemper would be nice, but Koskinen is not a bad goaltender. He’s just not necessarily proven he can be a regular starter.