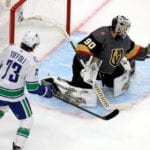 Does Lehner have a contract extension in place with the Golden Knights?

David Pagnotta: Sources are saying that the Vegas Golden Knights and pending unrestricted free agent goaltender Robin Lehner have a five-year contract extension in place. The deal was agreed upon before the season resumed.

Jesse Granger: Lehner said that report of him and the Golden Knights having an extension in place is “not true.”

“Nothing has been finalized. It’s kind of annoying. We’re here in the conference final, and people are saying things they don’t know.”

Brendan Batchelor: Vancouver Canucks pending unrestricted free agent forward Tyler Toffoli: “I want to talk to Jim and see where he’s at and where the team’s at because that’s priority number one right now…I want to stay in Vancouver.”

Does it make sense for the Jets to trade Patrik Laine?

Scott Billeck of the Winnipeg Sun: Why would the Winnipeg Jets be wanting to trade Patrik Laine when he has three years of control and the team’s goal is to win the Stanley Cup? His name has been in the rumor and it may make some sense to explore the idea.

The Jets are set on the wings for their top-two lines but carry a salary cap hit of just over $28.1 million for the four. Trading a winger does make some sense, and if they moved Laine, they should net a really good return.

A true second-line center is something the Jets could use.

If the Jets feel that they can’t sign Laine to a long-term contract extension, and if they can get a good return, they should explore the idea of trading him.

Could the Jets get Nick Suzuki and Victor Mete from the Montreal Canadiens for Laine? What about Nico Nischier from the New Jersey Devils, or Mika Zibanejad from the New York Rangers?