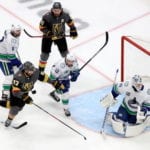 Canucks have cap concerns even without an internal budget

Brendan Batchelor: Vancouver Canucks GM Jim Benning on the Canucks being a cap team next season: “That’s a conversation that I’m going to have with ownership. The ownership has been very supportive of us and what we’re trying to do to rebuild the team.”

Sportsnet 650: Benning on their cap situation: “I will not be moving 1st and 2nd round picks to move out money.”

TSN Radio Vancouver: Thomas Drance on the Canucks: “One of the things we report…is #Canucks will look to shed salary this summer. The expectation is Jim Benning will become more personally involved this week, now that the team is eliminated. Benning is expected to gauge the market over the course of this week”

Satiar Shah: One of the Canucks offseason desires is to add another puck moving defenseman. Tyson Barrie is one free agent defenseman to keep an eye.

Leivo could be brought back

Patrick Johnston of the Vancouver Province: Vancouver Canucks forward Josh Leivo fractured his right knee cap last December. He was still rehabbing the injury when play resumed. GM Jim Benning said that if they had reached the Final, Leivo might have been ready.

Leivo will be a free agent. They don’t have a deal in place yet but they are interested in bringing him back.

“He played well for us. We haven’t ruled out re-signing him.”

Patrick Johnston of the Vancouver Province: Unless the Vancouver Canucks are able to move a big contract like Loui Eriksson or Brandon Sutter, it will be really hard for them to re-sign Jacob Markstrom, Tyler Toffoli, and Chris Tanev. They may only end up with one or two of them.

“We’re going to have to make some tough decisions on other guys,” Canucks general manager Jim Benning told TSN Radio’s Bob Marjanovich on Thursday morning, when asked if the Canucks could realistically sign all three UFAs.

Benning said that Eriksson makes “too much money to be just a good defensive player.” Eriksson has two years left at a $6 million cap hit, but only $5 million in salary.

RFAs Jake Virtanen and Troy Stecher may have to be moved out to keep their big three UFAs.

Tanev wants to stay but he knows he is not their top priority.

“Jacob (Markstrom) is our MVP and has been awesome for us the last few years. That’s going to take priority. It is what it is,” he said. “It’s something that I’m willing to do. Jacob’s a great friend and I’m hopeful he can stay in Vancouver a long time.”