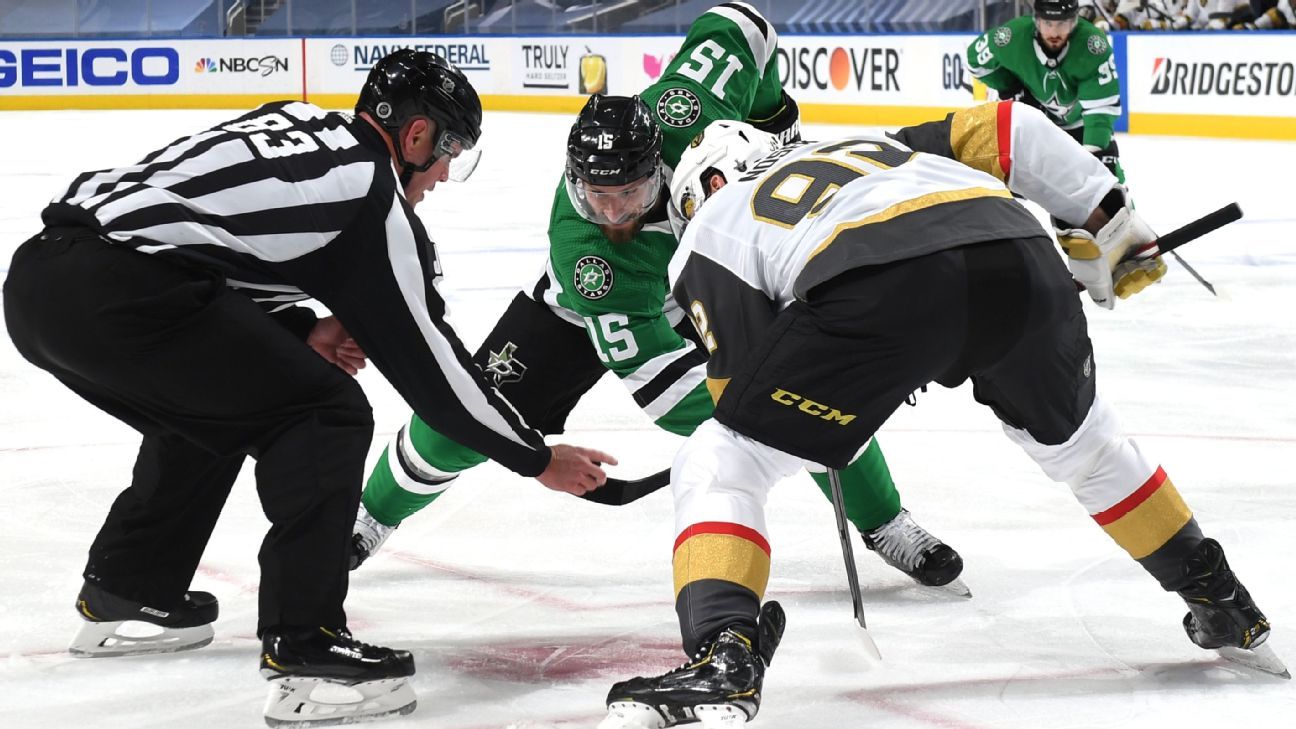 Slashes, fights, and goals galore. The Eastern Conference finals are just starting to heat up. Meanwhile, the Dallas Stars can put everyone on watch tonight, with the opportunity to go up 3-1 on the favored Vegas Golden Knights.

Check out ESPN NHL Playoffs Today every day of the postseason until the Stanley Cup is handed out in October.

It sounds like everyone knows the key to this series: the team that scores first has won all three games. “We talked about that this morning in our meeting,” Vegas defenseman Shea Theodore said Friday. “That’s going to be a focal point going forward.” Added Golden Knights coach Peter DeBoer: “Dallas is a very good defensive team and plays well within their structure, and it’s a lot easier for them to play within that when the game is tied or they have the lead.”

The Stars? They’re feeling good about that defensive structure, and the fact that coach Rick Bowness challenged his stars to step up, reigniting Jamie Benn, Alexander Radulov and Tyler Seguin on the top line. They responded by scoring two of the team’s three goals in Game 3.

Tampa Bay played without two of its most important forwards: leading scorer Brayden Point (undisclosed injury) and do-everything winger Alex Killorn (suspension). The Islanders, fearing the dreaded 0-3 hole, stormed to a 3-1 lead — then almost blew it. The Lightning tied the game, 3-3, in the third period, but the Islanders responded emphatically. Brock Nelson scored the game-winner with 3:25 remaining, then Jean-Gabriel Pageau added an empty netter.

“We’ve come too far,” Isles forward Cal Clutterbuck said after the game. “I don’t think packing it in is part of this team.” This is the Islanders’ first game of the postseason where they won despite giving up more than two goals (they were 0-6 previously). The Lightning don’t think they were outplayed, but they are lamenting what Tyler Johnson is calling “little mental mistakes.” Or, as Tampa Bay coach Jon Cooper put it more bluntly: “We handed that one to them. It was gift wrapped.” Full recap.

It was the most important goal of his Islanders career. And it also marked his fifth-career game-winning playoff goal for the Islanders, which places him in good company. The only other Islanders with more: Mike Bossy (17), Clark Gillies (12), Bryan Trottier (10), Denis Potvin (7), Bob Nystrom (7) and Brent Sutter (7)

Sergachev had a goal and an assist, and played 21:05, which trailed only Victor Hedman and Nikita Kucherov for the team lead. His goal, however, was the prettiest of the night. It started with a sick feed from Yanni Gourde, and ended with clinical execution of this backhand.

The breakout summer for Beauvillier continues, with a goal and an assist. Beavillier’s goal was his ninth of the postseason, which quietly has him tied for second with most goals postseason, behind only Vancouver’s Bo Horvat (10).

Question of the Day: Just how heated are the Eastern Conference finals going to get?

It felt like the series began escalating in Game 2, when Alex Killorn got a game misconduct for boarding Brock Nelson in the first period (Killorn was suspended for Game 3). Nelson returned to the game, but got hit from behind by Barclay Goodrow — an uncalled penalty, which Isles coach Barry Trotz said “was a little bit of a target to the head. They knew he was hurt, they targeted it a bit.”

Things only intensified in Game 3.

“I don’t know if it’s a rivalry,” Lightning defenseman Mikhail Sergachev said. “But they don’t like us and we don’t like them.”

Pageau’s take after the game sounded like a bit of a troll: “I mean, he’s a competitor. I think he was trying to get a stick on puck so he got the back of my leg. So he wasn’t too close.”

Game 3 ended with Matt Martin dropping the gloves against Goodrow. It sure feels like Game 4 could pick up from where we left off.

Clerical update of the day

The NHL has updated its critical dates calendar; the draft will now be held Oct. 6 and 7 (moved up from Oct. 9 and 10). Meanwhile, free agency will start on Oct. 9. Remember, the NHL and NHLPA agreed to do without the “interview period” in their new CBA, so there really should be some free agency frenzy on opening day.

Even the Stanley Cup must practice social distancing before entering the bubble.

Hanging out during the quarantine period. Only so many things you can look at in your hotel room. #StanleyCup @nhl@HockeyHallFame pic.twitter.com/bHeqDARufL

Ad campaign of the day

Looks like Lightning star Nikita Kucherov has a new spot with Bauer and I must say, it’s worth it to see him stick the final pose. Bravo, Nikita.

On Friday, Nathan MacKinnon won the Lady Byng Award, which is given “the player adjudged to have exhibited the best type of sportsmanship and gentlemanly conduct combined with a high standard of playing ability,” inherently the most difficult for a voter to judge. It’s really a shame defensemen never get enough consideration; Jaccob Slavin or Zach Werenski both had stellar “gentlemanly conduct” while putting up big, tough minutes. But alas, MacKinnon is a strong choice as he had a career-low 12 penalty minutes during the regular season, while posting the fifth-most points in the NHL with 93 (35 goals, 58 assists).

Up next: On Saturday, the NHL will recognize the general manager of the year. Finalists are Julien BriseBois of the Tampa Bay Lightning, Lou Lamoriello of the New York Islanders and Jim Nill of the Dallas Stars.