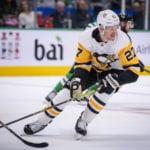 Penguins send Bjugstad to the Wild

Sarah McLellan of the Star-Tribune: The Minnesota Wild have acquired forward Nick Bjagstad from the Pittsburgh Penguins for a 2021 conditional seventh-round pick and the Penguins will retain half of Bjugstad’s salary.

Bjugstad attended Blaine High School and the University of Minnesota.

Sarah McLellan: The condition on the pick is if Bjugstad plays 70 games or records 35 points.

Chris Johnston: “This trade is an indication of how tough it’s going to be to move money during the 2020 NHL off-season: Pittsburgh may end up with nothing more than the $2.05M in extra cap room (plus $2.625M in actual salary saved) in exchange for Bjugstad.”

Coyotes wrap up first round of GM interviews

Craig Morgan: Source is saying that the first round of the Arizona Coyotes GM interviews ended yesterday. They will select the finalists for the second round of interviews.

Craig Morgan: Pierre McGuire is no longer a candidate and Shane Doan is not in the mix for the position. Steve Sullivan remaining is also a possibility.

Goaltender Ben Bishop, and defensemen Stephen Johns, and Taylor Fedun will be “unfit to play” in Game 4.

NHL: The NHL announces that the 2020 NHL draft will be held on Tuesday, October 6th and Wednesday the 7th.

The draft will be held virtually with round one on Tuesday at 7:00 PM ET. Rounds two through seven will be on the Wednesday starting at 11:30 AM ET.