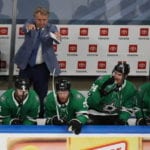 Head Coaching notes from around the league

Nill said that he was happy with the work Bowness did. They need to talk to see if Bowness even wants to continue being a head coach.

Pierre LeBrun of The Athletic: The Carolina Hurricanes could talk with head coach Rod Brind’Amour about extending him. He’s one of the lower paid NHL coaches.

The Arizona Coyotes and coach Rick Tocchet held brief contract extension talks before the season resumed, and at that time they decided to wait until their season was finished. John Chayka at the time was GM, but he’s since moved on.

Don’t believe the Chicago Blackhawks and Jeremy Colliton have talked contract yet but do expect them to talk before next season.

The entire Columbus Blue Jackets coaching staff is entering the final year of their deals. The Blue Jackets are in a holding pattern for now.

TSN: The Washington Capitals continue their head coaching search and are looking for someone with experience according to Pierre LeBrun and they are considering some big names.

“Well, it should surprise no one that sources confirm he has interviewed Gerard Gallant, he has interviewed Peter Laviolette and, yes, he has interviewed Mike Babcock. And I think he wants to hire one of those three experienced coaches I think within the next couple weeks. Now, all three coaches have term left on their deals with their former teams. In particular, Mike Babcock has more than $17M US left to be paid out over the next three years from the Toronto Maple Leafs. How much would it take for the Caps to pay Mike Babcock for the Leafs to sign off on it if they go that route. We’ll see if he goes Gallant, Laviolette or Babcock.”