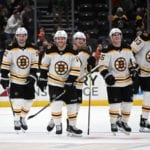 Joe Haggerty of the NBC Sports Boston: Boston Bruins president Cam Neely on the Bruins aging roster and the need to assess their team/organization.

“We’ve got some guys that have played a lot of good hockey for us, a lot of years for us. Their careers are somewhat winding down and we have to really take a hard look at where we are as an organization. Can we compete for a Stanley Cup and if we can, what do we have to do to our roster to do that?” said Neely.

Torey Krug is a pending UFA and Jake DeBrusk an RFA. DeBrusk could be looking at a big raise, he should hold some trade value and could allow a bit of a roster shakeup. The 34-year old David Krejci has a year left on his deal with a modified no-trade clause.

Amalie Benjamin of NHL.com: Bruins GM Don Sweeney said he’s not sure if he and Torey Krug’s camp will be able to come to a deal, but hopes that they can.

“We haven’t found a landing spot,” Sweeney said of Krug in particular. “I would hope that I’ll make the moves to be able to accommodate what he and his family and agent feel that he has earned. I would be the last person to begrudge any player trying to make the best decision they can make for their family.

“In a perfect world it’s with us, but we know that the world is anything but perfect right about now.”

Sweeney added that they will start talking to all their free agents in the upcoming weeks.

Krug has already said he isn’t interested in a short-term deal and he’ll be looking to get full value. Bruins president Cam Neely understands where Krug is coming from.

“Being a player, you certainly understand where the players’ heads are at times and I don’t begrudge Torey,” Neely said. “If we can’t work something out that makes sense for him and his family, I do not begrudge him for looking to see if he can get a better deal elsewhere. I mean we love Torey. We love what he’s brought to the organization both on and off the ice. He’s turned into a fabulous leader for us. But at the end of the day both sides have to do what they feel is right, us for the organization and Torey for him and his family.”

43-year old defenseman Zdeno Chara is a pending free agent and hopes he can re-sign with the Bruins.

“I believe that I can still play this game and contribute to the team,” Chara said last week. “I want to stay in Boston. I want to be a Boston Bruin.”