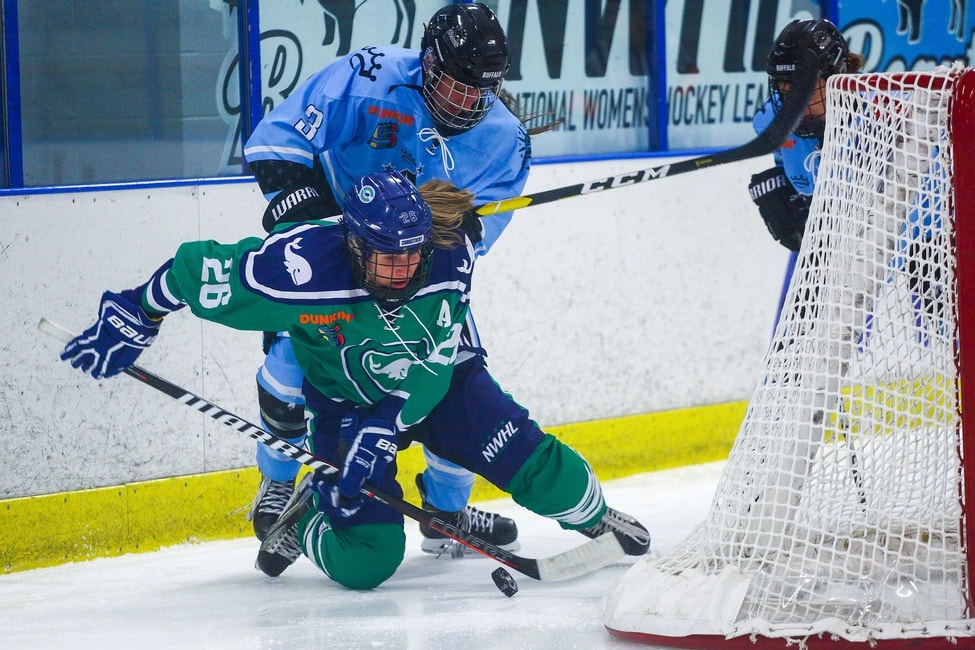 Occasionally I will be asked for my thoughts as to whether hitting (bodychecking) should be allowed in women’s hockey. For those unfamiliar with the rules for the women’s game, while body contact is allowed and happens quite regularly, bodychecking is not. Delivering a bodycheck constitutes a two-minute minor penalty.

If you really want to know my personal opinion, I have never thought that hitting was necessary in the women’s game. I feel that incorporating bodychecking would take away from what I enjoy most about women’s hockey – the skating, the playmaking, the puck battles, the sheer grace of the game.

Without being able to bodycheck in order to neutralize an opponent or create a turnover, there is a much more cerebral, tactical approach to women’s hockey that you do not find in other sports. It is what led me to following the game since Nagano ’98 and find a hockey hero in one of the players whose opinions I will be offering up shortly.

My own opinion carries only a (very) modest weight to it, though I certainly appreciate any instance where I am asked to comment on the game that I love dearly. So when it was posed to me – “should there be hitting in women’s hockey?” – the first thought that came through my head is that I am the wrong person to answer this question.

The players have always been far better suited to respond to questions such as these, and they are the ones whose opinions matter the most in this regard. Therefore, having posed the question to them instead, I have gathered the thoughts of 19 different current and former players from around the world to weigh in on the matter.

Included among the 19 are eight Olympians, two Angela James Bowl winners, three Isobel Cup champions, five Clarkson Cup winners, two NCAA champions and two current NCAA Division I players. I am very thankful for all of the opinions that each of them shared with me.

“I think it would be hard to change the rules right now, and it would probably take some time for players to adjust. I like it how it is right now because its still physical but also very skilled hockey since its not all about hitting.”

“I do not think the game needs it. As one of the bigger players when I played, I imagine it would have benefited me, but the game is physical, fast and incredibly entertaining as it is currently played. The only argument for checking would be to make a more consistently reffed game – it would help minimize the gray area that is at the ref’s discretion. But as the game continues to evolve, the officiating has become more consistent. I don’t think adding checking would be terrible, but I just don’t think our game needs it.”

“I think the women’s game thrives with body contact as it currently is because it better highlights the skill of the game – passing, skating, shooting, stick handling, making plays. You even see the boys and men’s game transition to more of a focus on body contact and less of the hardcore open ice hits because at the end of the day, the point of the game – men’s or women’s – is puck possession and scoring goals. I think the talent and skill of the women’s game is best showcased in its current form.”

“The women’s game is a great balance between skill and physicality. Even though there isn’t hitting, there’s plenty of body contact and battling. I like the focus being on speed and skill.”

“I think that just like in men’s hockey that women’s hockey has emotions too. Sometimes you want to use your hands and your body. On the ice, we don’t have to be ‘feminine’ – this is hockey.”

“I like our game the way it currently is with bodychecking disallowed. However, I would like to see allowed body contact along the boards when two players are skating in the same direction. I believe that referees should only call blatant bodychecking and let a lot of physical play go. Our game should mostly be played 5-on-5. Unfortunately, right now, we have to adjust to each referee from game to game as some are very lenient with physical contact and some are very severe. I want the physical play to be allowed.”

“I don’t believe hitting would be beneficial to women’s hockey as it could take away from some of the skill that is being showcased. The women’s game can get pretty physical without there being hitting. It could also discourage some young girls to continue playing the sport.”

“I think hitting in the women’s game is unnecessary. The game is getting faster and faster, and the number of head injuries – in both women’s and men’s hockey – is alarming. Women’s hockey is a physical game based on skill and tactics, and I think men’s hockey will eventually have to adjust and make changes.”

“Personally, I think bodychecks and hitting in women’s hockey aren’t necessary. It’s the game itself that is interesting. The beauty and the aesthetics of ice hockey are concentrated in our style of the game without rough and tough play. People like to watch the tactical style of the game, on-ice interactions between linemates, and beautiful stickhandling movements.”

“From my perspective, it is kind of hard to say since it doesn’t affect my game as much. The women’s game is already very physical, but right now it’s really hard for the refs to differentiate what ‘contact’ means. Maybe there could be room for changes in the rules to allow more body contact without it overtaking the game.”

“I guess I could go either way with it. I don’t think bodychecking would define women’s hockey since it can be quite physical already anyways.”

“I love the physical aspect of the game. I am a big, smart player who plays very physical, so bodychecking would really benefit me and my game. I do like the way our game has developed without bodychecking – the fast, smart and technical game. But personally I think women’s and men’s hockey should have the same rules to make the sport grow and get more people to watch.”

“I think we should change the rules and allow bodychecking and body contact in the women’s hockey. Today, the biggest difference between women’s and men’s hockey is the body contact and pace. Many people probably think that the beauty of the game would be ruined and others are worried that the flow would deteriorate. But I don’t think bodychecking would ruin the women’s game. Rather, I think the pace would increase as the girls became stronger and wiser. That would include being able to receive, give and undercut the bodychecking.

The risk is that the concussions would increase, but I think if girls got to learn the body contact at the same age as guys, then more and more players would be prepared to receive bangs like this. If the girls were given a chance to do bodychecking, then I think interest in women’s hockey would increase. People miss the physical game. With bodychecking included, I think we can open the women’s game up to a larger audience.”

“Personally, growing up playing boys hockey I was used to playing the body for the most part. I still find myself being more physical in some moments during a game. In my opinion I think playing the body is an important aspect of hockey, and since it is females playing against females, I would say to some extent bodychecking should be allowed.”

“Personally I don’t think there needs to be hitting in the women’s game. I think if you see the way the men’s game is going now it’s kind of shying away from hitting a bit more and going towards more skill and speed. I think that’s what the women’s game is about today. The body contact is great. I think we can even allow a little more of it but the game is moving away from those big open ice hits. It’s all about positioning and angling which is very challenging. “

“I think there already is a lot of bodychecking in the women’s game, in my opinion. I think the speed of the game is the most important aspect of both the men’s and women’s game, and it’s not as much the hitting that takes away from the speed but the hooking.”

“I think bodychecking is a part of hockey and it should be allowed in women’s hockey as well. I am talking about bodychecking from the side when it is shoulder on shoulder, same level. Also, not allowing bodychecking causes so many other penalties like slashing or tripping and it is harder to take the puck from an another player.”