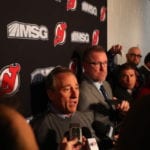 Mike Morreale of NHL.com:  It has been a surreal offseason for many teams but New Jersey will be one of the seven that expects at least a nine month layoff. They prepare for the NHL Draft to be held virtually October 9th and 10th.

New Jersey owns the seventh overall pick, along with the 18th and 20th picks as well. Fitzgerald ponders the idea of still trading one of those later picks in the hopes of moving down or part of a larger package.

The lessons of former boss, Ray Shero, ring in Fitzgerald’s head. Fitzgerald remains open to other’s input and makes his decisions based on that and his own intuition. As far as drafting, Fitzgerald wants to draft the best players available to bolster the team’s prospect pool.

Finally, there is last year’s draft pick in Jack Hughes. Many pundits deadpanned New Jersey for the forward’s lack of upper body strength in season one. Hughes improving that with Mike Kadar (strength and conditioning coach) this summer has been noticeable. More work needs to be done but progress is being made.

Corey Masisak of The Athletic:  Again, there are ways to add core players and New Jersey has several opportunities in this year’s draft and likely next year’s. Does this mean New Jersey will be dreadful for the next several years? Not necessarily. Be mindful that core players or near core players can be traded as well. New Jersey’s cap space facilitating a deal would not surprise anyone.

The most prudent path is from within. Ty Smith expects to be an integral part of New Jersey’s defensive renaissance starting as soon as this season. Does New Jersey go with a defenseman at seven? That is a huge question. The Jamie Drysdale-Jake Sanderson debate rages onward. Drysdale likely has the better upside but Sanderson has improved.

Besides that, there is Alexander Holtz and Cole Perfetti if Fitzgerald desires to boost offensive firepower. How the first six picks go likely determines the general manager’s path.