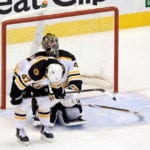 Keys to the offseason for the Boston Bruins

Emily Kaplan and Greg Wyshynski of ESPN: Looking at some of the key decisions the Boston Bruins will be facing this offseason.

Decide whether to re-sign UFA defenseman Torey Krug – Both sides continue to stay they want to work out a deal. The Bruins would be able to squeeze in a new contract for the 29-year old, but he could get some bigger offers (Detroit Red Wings) if he hits the open market.

Stay the course but tinker – They were the top team in the regular season. Their core is aging but they do have some cap flexibility. Speed and toughness could be upgraded. Would Taylor Hall take a one year deal to chase a Cup?

Make sure all is well with Rask – The entire organization has said they support Tuukka Rask and his decision to leave the bubble for family concerns. The 33-year old Rask has a year left on his deal at $7 million.

Matt Porter: A source who is close to close to Bruins defenseman Zdeno Chara said before Game 5 that Chara hasn’t made any decision on his playing future and that he wasn’t talking about it until the offseason.

Joe Haggerty: Bruins forward David Krejci: “It just kind of hit me after the game, the core group — a few of us we have 1 or 2 years left — and with the pandemic going on you never know what’s going to happen. So it’s a little sad right now”

“Well, I don’t want to speculate if those are their last games. Those are decisions that will be made by the player and management going forward,” Bruce Cassidy began. “I’ve said all along, grateful to have an opportunity to coach Zee. It was early in my NHL career, so to speak, later in his playing career. He helped me a lot.

“Torey is a little different. I got him well into my American League career and he was just basically starting out. So it’s a much different situation, where you almost feel like Zee probably helped me more than I’ve helped him, and with Krug it was a little more of watching him grow and being a bigger part in his development.”

Krug has admitted earlier this year that this year could be his final season in a Bruins jersey.

Jimmy Murphy of Boston Hockey Now: Zdeno Chara on if he’ll retire or come back for another season.

“I haven’t made that decision,” Chara said. “I obviously just finished the game. I’ll be open-minded.”

Chara is coming off a one-year deal with a $2 million base salary and $1.75 million in potential bonuses.