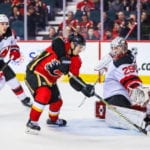 Randy Miller of NJ.com: Calgary Flames forward Johnny Gaudreau is back in the rumor mill. The Flames could be looking to shake up their core, with Gaudreau and maybe Sean Monahan possibly being shopped this offseason.

The New Jersey Devils could use an offensive winger for their top-six to play with either Nico Hischier or Jack Hughes. Gaudreau is from Carneys Point, New Jersey.

The Devils have three first-round picks in the 2020 NHL draft and have some good prospects that might interest the Flames.

Gaudreau has two years left on his contract at a $6.75 million salary cap hit. The Devils can easily take on the cap hit, but they aren’t expected to start contending for another two or three seasons.

Pierre McGuire on the possibility of the Devils being interested in Gaudreau.

“First off, the Devils would have to establish where they think they are in terms of the building process,” NBC Sports hockey analyst Pierre McGuire told NJ Advance Media from Edmonton. “New Jersey’s not at the level now where they’re ready to compete for the Cup.

“If Calgary tries to trade Johnny Gaudreau – and I want to stress if – they’re going to create marketplace because he’s a big name who has put up big points. So everybody has to be prudent in terms of not over-purchasing because the Flames definitely are going to create a bidding war. I think there probably would be three, four, five or six teams involved.”

McGuire thinks the Philadelphia Flyers, and maybe the Washington Capitals would be interested in Gaudreau.

Would the Flames be interested in Damon Severson and first-round pick or elite prospect?

The price for Kapanen likely too high for the Anaheim Ducks

Eric Stephens of The Athletic: The Anaheim Ducks are looking for some NHL-ready scoring help. GM Bob Murray likely had some interest in Kasperi Kapanen before he was traded to the Pittsburgh Penguins, but there wasn’t any reason for them to pay the price that the Penguins did.

The Ducks do have two first-round picks and prospects in Max Comtois, Benoit-Olivier Groulx and Isac Lundestrom. It’s not known the level of interest from Ducks. Talks should have been short if the Leafs were wanting the No. 6 pick.

Potential trade targets for the Ducks could include Jake Virtanen, Josh Anderson and Jesse Puljujarvi. None of those players would cost a high first-round pick.

The Ducks do have the No. 27 pick from Tampa Bay and their own second at No. 36.