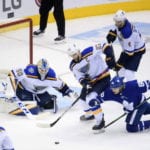 Sportsnet: The Florida Panthers and Arizona Coyotes are searching for a new GM. Chris Johnston said that both teams have considered Kevin Weekes, Mike Futa and Bill Armstrong.  Current Coyotes interim GM Steve Sullivan is interviewing for the permanent position.

“Florida is getting close to cutting down its list,” Friedman said Saturday. “The head coach, Joel Quenneville, is expected to become more involved in the process as they do this.”

Maple Leafs gearing up for a run at Pietrangelo?

Luke Fox of Sportsnet: Alex Pietrangelo wants to re-sign with the St. Louis Blues but there is plenty of speculation of him coming home and signing with Toronto Maple Leafs. It seemed unlikely that it could happen, but a couple of things have changed this past week.

The Maple Leafs trading of Kasperi Kapanen gave them some salary cap relief, and GM Kyle Dubas said that could move more players from their roster to create more cap relief.

Vladimir Tarasenko went under the knife again and is out for at least five months. The Blues need to re-sign RFA defenseman Vince Dunn. Will GM Doug Armstrong give pause to committing a large term and money to his blue line? Armstrong has said that he would like to keep Pietrangelo. He traded for and extended both Justin Faulk and Marco Scandella in the past year as insurance.

Would guess that the Blues offer for Pietrangelo will be lower than what he could get on the open market.

The Maple Leafs biggest offseason need is a right-handed defenseman. The Leafs need to explore the idea if he hits the open market. They would need to trade out more salary, and they might have to move William Nylander.

Luke Fox of Sportsnet: Philadelphia Flyers GM Chuck Fletcher said that the flattening of the salary cap for the next several seasons isn’t great news for potential free agents but it could mean there will be more trades.

“You might see more hockey trades, the dollar-for-dollar trades where teams need to improve or need to upgrade in certain areas. If you don’t have the ability to go into the UFA market, you have to be creative and find solutions with other teams. So, it’s going to be very interesting.”