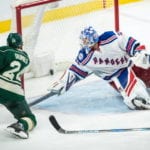 Teams will be calling the Rangers about the No. 1 pick

Bruce Garrioch of the Ottawa Sun: New York Rangers GM Jeff Gorton on what they are going to do with the No. 1 overall pick.

“If I just went on this call and told you all the things we’re going to do, it probably doesn’t help me on the market when I make calls,” Gorton said. “We have to have more meetings and I like to play a little closer to the vest than announcing we’re going to go get centres or do something else.”

Will the Rangers keep the No. 1 pick or do they trade it in a deal that includes a No. 2 center? The Rangers already have Artemi Panarin and Chris Kreider already on the left side. It would take a big offer for the Rangers to move the pick.

Can expect Ottawa Senators GM Pierre Dorion to speak with Gorton. The Montreal Canadiens would love to land Alexis Lafreniere. The Detroit Red Wings lost out on the lottery and can expect them to make a pitch.

Plenty of options for the Wild to make some changes

“I’ve got to figure out what’s the issue,” Guerin said on the podcast. “Why have we been falling short? The teams are good. The guys play hard, but there’s something rooted here that it’s not working and it’s not just trading players and changing the GM and things like that. It’s something in the way we operate every day. It’s something in the culture, and we need to change it.”

Offseason questions for the Wild

Will the Wild be able to trade defenseman Jonas Brodin or Matt Dumba in a deal for a No. 1 center?

Would the Wild be able to sign a top-six center in free agency?

Can they trade a goaltender and acquire another goalie through trade or free agency? Do they promote Kaapo Kahkonen?

Will they talk again with the New York Islanders about a Zach Parise trade?

Will the Wild look to re-sign Mikko Koivu and/or Alex Galchenyuk?

Will they trade or buy out Devan Dubnyk or Victor Rask?

Can they trade Mats Zuccarello and his no-movement clause?

Will they look to trade Jordan Greenway or Ryan Donato?

“We’re going to have to try to mix things up a little bit here this offseason,” Guerin said on the podcast. “The amount of things that we’re going to try to do or be able to do is still up in the air. We’ll see. There’s some possibilities.”