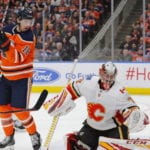 NHL doing 1,500 tests per day with no positives so far

Darren Dreger: Since Sunday when the teams arrived in the Hub cities, the NHL has conducted 1,500 tests per day and there have been no positive COVID test results. Results are processed in 24 hours or less.

Andy Strickland: St. Louis Blues GM Doug Armstrong said yesterday that he would be surprised if there was even one positive test in Edmonton during the playoffs.

NHL: The NHL has ruled that the Edmonton Oilers will transfer either their 2020 or 2021 third-round pick to the Calgary Flames to complete the Milan Lucic-James Neal trade.

The Oilers have until the start of the third round in the 2020 NHL draft whether to transfer the pick this year.

Pierre LeBrun: Believe that the NHL made the right call here.

Eric Francis: “Fans on each side will have their biased thoughts, but this is a common sense ruling by the league. It stands up to the spirit of the provisions. The right call, especially the part where the league gave the Oilers an option to give up the pick this year or next.”

Chris Johnston: The NHL ruled that the Toronto Maple Leafs will owe the Los Angeles Kings a 2021 second-round pick if they win their play-in round against the Columbus Blue Jackets and if Jack Campbell wins two or more games, or if the Maple Leafs re-sign Kyle Clifford.

If either of those conditions isn’t met, the Maple Leafs owe the Kings a 2021 third-round pick.

Cap Friendly: There are five different scenarios for the Sami Vatanen trade from the New Jersey Devils to the Carolina Hurricanes. The Devils would receive:

When dad has to separate you and your brother @CamAtkinson13 from fighting 🤣 #photoshopped #NHL pic.twitter.com/6emSOGy2mm