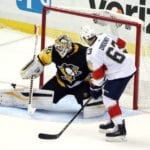 Elliotte Friedman of Sportsnet: Believe that the Arizona Coyotes’ initial offer to pending UFA Taylor Hall was a five-year deal with a $7.25 million AAV. That won’t be their final offer. Also, believe that situation is very important to Hall.

While the Coyotes re-signing Hall remains an option, it’s hard to see the Peter Chiarelli to the Coyotes rumors coming true.

Mike Futa and Laurence Gilman were the finalists for the New Jersey Devils GM position before they gave the title to Tom Fitzgerald. Mark Hunter, Chris MacFarland and Ed Olczyk were also interviewed.

Edmonton Oilers forward Andreas Athanasiou is a pending RFA with arbitration rights. Things could be tight for the Oilers with regards to the salary cap. Athanasiou’s playoffs could go a long way in where he ends up.

Will this be the final season for Minnesota Wild captain Mikko Koivu?

The Florida Panthers are expected to cut payroll this offseason and unrestricted free agents Evgenii Dadonov and Mike Hoffman are likely gone.

Pittsburgh Penguins GM Jim Rutherford said that Matt Murray started off slow but had a good second half. Could they keep both Murray and Tristan Jarry?

“You can always find ways to move money around … at a different position and keep both goalies. I don’t think it needs to boil down to people automatically thinking that Matt Murray’s the guy who needs to leave Pittsburgh.”

Penguins GM Rutherford on if there will be Evgeni Malkin trade rumors again this offseason.

“Only if somebody makes them up.”

Will the performances of David Rittich and Cam Talbot persuade the Calgary Flames to not go in a different direction?