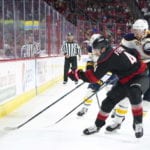 Corey Masisak of The Athletic: (mailbag) More teams will likely be looking at bridge deals for restricted free agents as opposed to long-term deals. One downfall for teams doing this is that players will be closer to unrestricted free agency and they tend to sign for more.

For the players who could sign big contracts this offseason, they may look at have their contract back-loaded as opposed to front-loaded because of the 10 percent escrow next year and 20 percent the following year.

The Carolina Hurricanes have a surplus of defensemen now, but Sami Vatanen, Joel Edmundson and Trevor van Riemsdyk could leave via free agency. For the Seattle expansion draft, they could have some tough decisions with regards to their blueline, but wouldn’t expect them to make moves this offseason based on that.

If not traded, the likes of Jake Bean, Haydn Fleury or Brady Skjei could be left unprotected. The Hurricanes and the Seattle Kraken could work out a deal to take/not take a specific player. The Hurricanes could also ask/hope to convince Jordan Staal to waive his no-movement clause which could allow the Hurricanes to protect four defensemen.

Sabres UFAs and their first-round pick

Larsson gets some love but projections could have him in the $3 million per season range and they can fill his spot with a $1 million player.

Trading the No. 8 pick for immediate help would go along ways in helping them make the playoffs next year. If they kept the pick, that player should help them out in two or three years. Would say it’s 50-50 that they move the pick for a player this year. They could look to move their 2021 first-round pick.