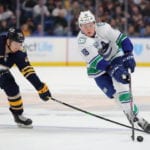 Some realistic and blockbuster trade targets for the Buffalo Sabres

John Vogl of The Athletic: The Buffalo Sabres have just 10 players under contract for next season. New GM Kevyn Adams has eight restricted free agents to deal with, but he’ll have some cap space to possibly get creative with. There are many teams this offseason that could be looking to shed some salary and the Sabres could be willing to help them out. 21 trade targets from 10 teams.

Chicago Blackhawks – Dylan Strome and Brandon Saad could be realistic targets. Hometown Patrick Kane would be a blockbuster. Would Sam Reinhart, Casey Mittelstadt, and the No. 8th pick be enough?

Toronto Maple Leafs – Realistic trade targets could include Kasperi Kapanen, Alexander Kerfoot, Andreas Johnsson, and Ilya Mikheyev. The Leafs want to keep Mikheyev but may not be able to afford him.

Arizona Coyotes – Realistic trade targets could include Derek Stepan, Nick Schmaltz, and Christian Dvorak. Stepan and his $6.5 million contract for one more year wouldn’t cost much to acquire. Adding Phil Kessel would be a blockbuster. Kessel has two years left at $6.8 million and playing with Jack Eichel might entice him.

St. Louis Blues – Backup goaltender Jake Allen could be a realistic target. Could be a one-year upgrade until Ukko-Pekka Luukkonen ready in 2021-22.

Pittsburgh Penguins – Nick Bjugstad could be a realistic trade target. He has one-year left at $4.1 million. Kris Letang would be a blockbuster. He has two years left at $7.25 million and the Penguins may want to go cheaper with Rasmus Ristolainen or Brandon Montour.

Tampa Bay Lightning – Anthony Cirelli would be a blockbuster. He’s a pending RFA and they have eight players with no-trade or no-movement clauses.

Vancouver Canucks – Jake Virtanen is a pending RFA would give the Sabres some extra depth behind Sam Reinhart.