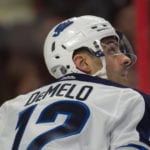 DeMelo an offseason priority for the Jets

Ken Wiebe of Sportsnet: (mailbag) One the Winnipeg Jets main priorities this offseason will be to re-sign defenseman Dylan DeMelo. The Jets have a bit more flexibility this offseason than they did last offseason when they needed to re-sign Kyle Connor and Patrik Laine.

DeMelo may not be looking for a huge deal but how important will testing free agency be for him?

“There hasn’t been much conversation yet in that regard, and I think we see with the way the world was, I don’t think that was obviously a topic for discussion,” DeMelo said during a zoom call. “But I think I’ve fit in here very well, and I think there’s definitely a possibility of that in the future, of possibly re-signing here. And if that is the case, I would definitely welcome it, I enjoyed my time here so far.”

DeMelo added that he’ll worry about the contract after the season as the playoffs are his main focus now.

The Devils have some cap space to play with

Matt Larkin of The Hockey News: The New Jersey Devils head into the offseason with some salary cap space available, upwards of $26 million.

Goaltender Mackenzie Blackwood is their only restricted free agent that is due for a significant raise. They could go long-term with him or he could go the “prove it” route on a two- or three-year deal like Matt Murray and Jordan Binnington did.

On the free agent market, the Devils could look at Florida Panthers winger Mike Hoffman, who might look good beside Jack Hughes.

The Devils could also look to take advantage of their salary cap space and by making a deal with a team that is looking to shed some salary with a draft pick sweetener thrown in. They could also go the route of trading for a high-priced player that doesn’t have a lot of term left on his deal as they did in the P.K. Subban trade.