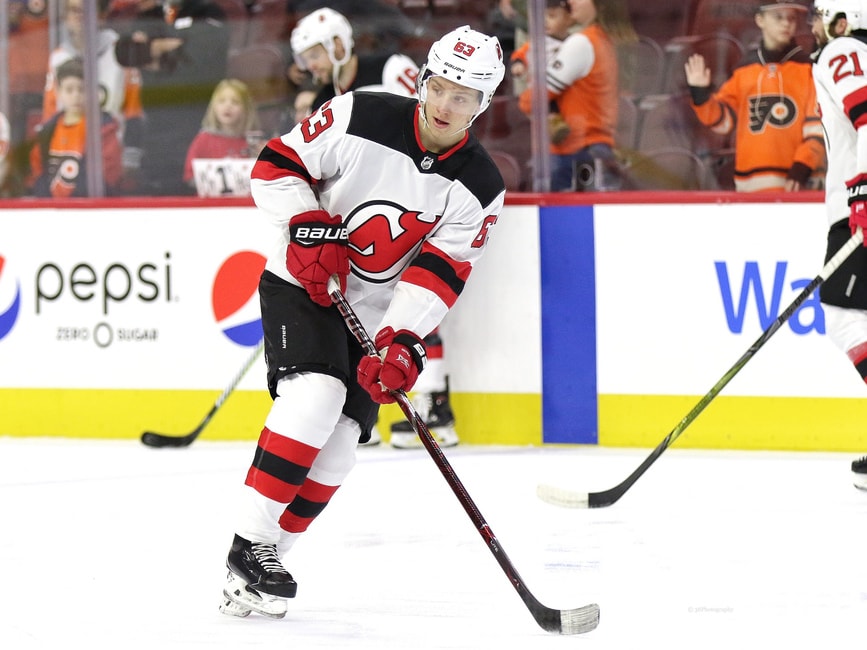 The Swedish winger was a sixth-round pick of the Devils in 2016 and has performed well above that draft slot, averaging 44 points per 82 games since entering the league in 2017-18. That means a significant pay raise is on the way for the 22-year-old, one the Devils shouldn’t be shy to hand out for the budding top-six winger.

Bratt on an Upward Trajectory

Bratt had a solid rookie season in 2017-18, as he finished with 13 goals and 22 assists in 74 games, though he cooled down significantly over the second half — he had six points over his final 31 games. But without his first-half performance, the Devils wouldn’t have been in a spot to clinch a playoff berth at season’s end.

While he only played in 51 games in 2018-19 due to injuries, Bratt still took a significant step forward in his development. He finished with 33 points in 51 games, a 53-point pace over 82 games, and was the Devils’ second-most efficient five-on-five scorer behind Taylor Hall. He also got some time on the top line, though the team’s injury situation played a role in that.

The hope was that progress would continue entering this past season, but Bratt had a nightmare start. He had only seven points in his first 21 games and was a healthy scratch on a few occasions. When he did play, he saw regular minutes on the fourth line alongside Kevin Rooney and Nikita Gusev.

But things changed once the Devils fired John Hynes and named Alain Nasreddine the interim coach. Nasreddine, for the most part, played Bratt alongside other scorers. It also helped the team began playing at a much faster pace than they did under Hynes. The result was Bratt finishing with 25 points in his final 39 games, a 53-point pace over 82 games. He also became one of the Devils’ top goal scorers, as his shooting ability improved markedly.

And on top of developing his shot, Bratt’s defensive game saw significant growth. His goals above replacement (GAR) of 9.6 ranked third-best on the team, partly because of his improved 200-foot game. The only forward to have a better even-strength defensive GAR was Blake Coleman, a far cry from where Bratt was as a rookie.

Bratt had a significant negative impact defensively as a rookie. The same is true on offense. But he’s begun to show signs of becoming a complete, two-way player. The key for him will be finding more consistency. But in the right role and system, he could be on the verge of breaking out.

Because Bratt was a sixth-round pick, his entry-level deal came with a cap hit just under $750,000. It’s safe to say he’s going to earn seven figures annually, but how much money will he get? And how many years could he receive? There are a few recent RFA signings that offer examples.

Johnsson is one of the most recent comparables for projecting Bratt’s next contract. He was a seventh-round pick of the Toronto Maple Leafs at the 2013 Draft, and can play both left and right-wing like Bratt. He played two seasons in the SHL (Sweden) before making his way to North America. In 2017-18, his second in the AHL, he averaged a point per game for the Toronto Marlies.

Unlike Bratt, who was 19 years old when he made his NHL debut, Johnsson was 23 when he played his first NHL game in 2017-18. His first full NHL season with the Maple Leafs came in 2018-19, and he managed to finish with 20 goals and 43 points in 73 games. His GAR of 7.8 ranked him ahead of Logan Couture, Mats Zuccarello, and Matthew Tkachuk, to name a few. Though he only had one season of NHL experience, that was good enough for the Leafs to sign him to a four-year extension worth a total of $13.6 million ($3.4 million cap hit).

Pearson may not be the first forward you think of as a comparable for Bratt, but there are similarities. Pearson was a first-round pick of the Los Angeles Kings at the 2012 Draft. He made his NHL debut during the 2013-14 season as a 21-year-old and played in 25 games while managing seven points. He became an NHL regular in 2015-16 and made his mark on the team, as he finished with 36 points in 79 games.

Kapanen’s situation isn’t much different than Johnsson’s, though he was a first-round pick of the Pittsburgh Penguins at the 2012 Draft. He played one season in the Liiga (Finland) before making his way to North America. He spent the better part of three seasons with the Marlies, where he had 92 points in 115 games from 2015-2018.

His first full NHL season came in 2018-19, like Johnsson, and he managed to total 20 goals and 44 points in 78 games. He had a GAR of 7.5, thanks to his strong offensive performance. Despite having only one full season of NHL experience, also like Johnsson, the Leafs signed Kapanen to a three-year extension worth a total of $9.6 million ($3.2 million cap hit). But unlike Johnsson, Kapanen will still be an RFA when that extension expires in 2023.

Where Negotiations Will End Up

The Devils have been on both sides of the coin with recent RFA negotiations. They handed Will Butcher, Pavel Zacha, and Miles Wood bridge deals anywhere from two to four years. They’ve also given long-term extensions to Nico Hischier (seven years), as well as Damon Severson (six years).

There’s a good case for the Devils to sign Bratt to an extension closer to Hischier and Severson, at least in years. That said, it’s not something that happens all that often with RFAs. The more likely scenario is he gets something closer to Kapanen, Johnsson, and Pearson.

All three of those players’ cap hits are roughly the same. In their contract years, they finished with 43, 44, and 40 points. Bratt had 32 points in 60 games this season, a 44-point pace over 82 games. Johnsson averaged 2.49 points/60 minutes at five-on-five in his contract year, while Kapanen averaged 1.90. Bratt averaged 2.21 points/60 this season, so he falls right in between those two.

In comparison to Pearson, Bratt was the more efficient five-on-five scorer in the two seasons before they were due for extensions — Pearson averaged 1.67 points/60. But they each fared better defensively than Johnsson and Kapanen.

Because all four players produced at similar levels in their contract years, it’d be a surprise if Bratt’s next deal wasn’t close to identical. A three to four-year extension would take him to his age-25 or 26 seasons, so he’d still be an RFA at its conclusion. It also wouldn’t be a surprise to see his cap hit come somewhere close to Johnsson or Pearson’s. So I’d expect Bratt’s next deal to range from 3-4 years with a cap hit around $3.4 to $3.75 million. And if his upward trajectory continues, it could end up as one of the best contracts the Devils have on the books.