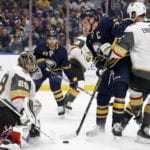 Joe DiBiase of WGR 550: There is no way the Buffalo Sabres are going to trade forward Jack Eichel. Yes, he aired his frustration with losing, but that is about it. gets why fans of some teams would be interested in the idea of acquiring. The cost would high, and most may not want to pay that high a price. It should include a young No. 1 center and another big piece. A look at the teams that would have the pieces to make the type of deal the Sabres would require.

“Likely none of the teams listed would give up these packages to get Eichel. If you didn’t understand before why the idea of Eichel being traded was completely unrealistic, hopefully you do now.”

Potential goaltender targets for the Golden Knights next season

The Golden Knights could look for players at next year’s trade deadline that come from teams who don’t want to lose those players for nothing in the expansion draft. Trades that could help them in the long-run.

Teams are only allowed to protect one goaltender. The Golden Knights might need another goaltender if Robin Lehner leaves in free agency this offseason. Marc-Andre Fleury has two years left on his deal and is 35-years old. Potential trade targets could include.

Thatcher Demko – Vancouver Canucks – Would be exposed for the expansion draft if the Canucks re-sign Jacob Markstrom to a long-term deal.

Antti Raanta – Arizona Coyotes – Would the Coyotes trade to a division rival?

Frederik Andersen – Toronto Maple Leafs – He’ll be a UFA after next season. The Leafs have Jack Campbell signed at $1.65 million through 2022. Could the Leafs decide to protect Campbell?

Pavel Francouz – Colorado Avalanche – The Avs may need to decide between Philipp Grubauer and Francouz.