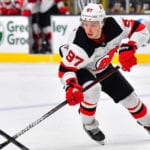 Corey Masisak of The Athletic: The New Jersey Devils will have some salary cap space available this offseason. Interim GM Tom Fitzgerald has said he’d like to add some veteran players.

It is possible that whoever ends up being the GM of the team doesn’t find any free agents or trade partners. There is no need to overpay.

Potential free agent targets for the Devils could be forward Carl Soderberg and defenseman Jon Merrill. Soderberg could help mentor some of the Devils young Swedish players. Merrill wouldn’t cost much and he’d bring a little more size to the lineup.

If the Devils are not in the playoff running next season, they could look to move Nikita Gusev and Connor Carrick for future assets.

Corey Masisak of The Athletic: (mailbag) One issue the New Jersey Devils are having with not making a decision on their GM and Coaching position is that they not able to talk to all potential candidates as the season isn’t over.

Believe the Devils will name a coach well before November, especially if they hold minicamp/tournament in September or October.

The Devils don’t own their 2021 second-round pick so they won’t be offer sheeting anyone in that range. There isn’t an RFA this year that is worth $10 million-plus and four first-round picks. On the other side, the low-end RFAs would be matched or make it too costly for the Devils to sign that player.

If the top-end UFAs get money as they would in the past, the Devils likely aren’t interested, but if they are much lower, can’t rule anything out. Just guessing, but they could be interested in someone in the $5 million range and more than one-year.

Would be a surprise if they didn’t add at least one veteran defenseman and one veteran forward.

GM Tom Fitzgerald when asked if they would be open to trading one of their first-round picks.

“Would something come across our table where we get to immediately improve our team by moving one of these assets? Whether you use them now to draft and to grow them and they become an impactful player on your team whatever many years down the road or you move them for something that helps your team now, these are all assets to help (the) New Jersey Devils grow and get better.

“There’s no definitive answer (on what could be found in a trade), and you just don’t know until it happens. Can you say, ‘I want a young 22-year-old defenseman who can log 28 minutes’ for that pick? Well, you can dream. At the end of the day, you go into the draft prepared to pick at that spot. If something came your way, you’re all ears.”