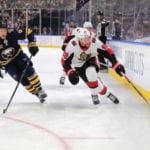 Elliotte Friedman of Sportsnet: Lindy Ruff has a shot at being the New Jersey Devils next head coach.

Potential GM candidates that they are talking to have asked if they could have some input on the coaching decision. Some have said that Ruff is a candidate no matter what.

Senators would listen, but likely not trading their top picks

Bruce Garrioch: Ottawa Senators GM Pierre Dorion said that they will listen to trade offers for the No. 3 and No. 5 pick, but added that he’s 99.9 percent certain that they will keep those picks.

“I think we’re going to have a lot of conversations,” Dorion said. “I’m very fortunate to be in a business where I work with 30 very smart counterparts. Discussions are always productive. Those discussions I’m sure will take place. Everybody knows how good this draft is. So, No. 3 and No. 5 will 99.99 per cent be off the table, but at the same time you always have to listen for the benefit of this organization.

“Part of the plan is taking two good players for this organization.”

The Sabres should trade their Eighth overall pick

Mike Harrington of the Buffalo News: believes the Buffalo Sabres should trade their first-round pick, eighth overall. GM Kevyn Adams should tell teams that it’s available and he has over three months to get a trade done.

The Sabres can not afford to wait until 2022-23 for the contributions of a potential pick to be felt. They need help immediately, especially down the middle.

They need to see if they can acquire a No. 2 center. Maybe they could include Brandon Montour to sweeten the pot.

Sources say that when Jason Botterill was the GM, he have no intention of trading their first-round pick.

Adams trading the eighth overall pick could be risky as you can draft a really good player there.