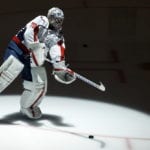 Kurt Leavins of the Edmonton Journal: Now that Edmonton Oilers defenseman Dmitri Samorukov is signed to play in the KHL next season, it shouldn’t be a surprise if they sign a couple of defensemen who could play in the AHL and be inexpensive NHL options. One right-handed and one left-handed defenseman would make sense.

The Oilers could also look for veteran goalie in the $700,000 range.

It shouldn’t be a surprise if Jesse Puljujarvi signs a one-year contract extension with Karpat of the Finnish league in the next couple of weeks. A deal would likely contain an NHL out.

Was Puljujarvi’s “never say never” comment a sign that he’s open to returning to Edmonton or an attempt to ‘rehabilitate his trade value’?

Luke Fox of Sportsnet: Washington Capitals coach Todd Reirden said that it’s Braden Holtby‘s job to lose when their playoffs get underway, and that “he’ll get the first crack it.”

Holtby is a pending free agent and isn’t sure how the economics of the pause will impact his next contract.

“I haven’t thought of it past the fact of when it might be. There’s so much up in the air right now, even if free agency is later on, October, November, whatever. Our first thought was: ‘What do we do with the kids in school?’ With so much uncertainty, but who knows if the schools will even be running by then?” Holtby said.

“I’m trying to do everything I can in this time, once we get back playing, to win a championship.”

NHL.com: Martin Brodeur said that he isn’t interested in becoming a general manager just yet, even if the New Jersey Devils offered him the position.

“I know what it takes to be a GM. I’ve been around Doug Armstrong (with the St. Louis Blues) for a long time and Lou Lamoriello (with the Devils),” Brodeur said in remarks published Thursday. “I’m just not ready for the commitment, regardless of whether it would be offered to me.”