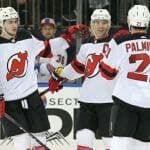 Could the Devils bring back Andy Greene? May take a year or two to attract free agents

Corey Masisak of The Athletic: (mailbag) If the New Jersey Devils are looking to bring in a veteran defenseman this offseason to help mentor some of their younger players, bringing back Andy Greene could be an option.

The Devils are armed with plenty of salary cap space his offseason but they may not be a position to win just yet. This might not be the offseason for the Devils to chase free agents.

It may take a year or two for the Devils to be ready to complete, and for players to be interested in signing with the team.

Kyle Palmieri hopes he can re-sign with the Devils

Randy Miller of NJ.com: New Jersey Devils forward Kyle Palmieri has enjoyed playing in his hometown for the past five years, but he’s not enjoying missing the playoffs. They’ve only been in one playoff series, which the lost.

The 29-year old is pending UFA and hopes he’s able to stay.

“Without a doubt,” Palmieri said Tuesday in a media conference call. “I do love being in New Jersey. I love being close to home. And I have a ton of belief in this organization moving forward as to what we’re building, and I hope to be a part of it.”

Palmieri adds that he hasn’t thought too much about it as a lot of it is out of his control.

“I haven’t thought a lot about it,” Palmieri said. “Up until what was going to be this offseason, it wasn’t really something that I needed to think about or focus on. But you’ve seen in recent years how some of that stuff has transpired. Obviously, I have buddies who went through it, and you talk to guys and hear their thoughts on the situation.”