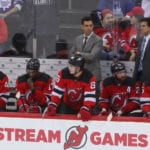 On the Devils head coaching position

“…  but the name that I keep hearing, James, is a familiar one. And that is Peter Laviolette, formerly of the Nashville Predators, but Tom Fitzgerald, who is the interim general manager, who has been managing this search. He still hasn’t had the interim tag removed from his title. So it’s an ongoing process for the Devils.”

Corey Masisak: GM Fitzgerald on Pierre LeBrun’s report that the Devils have interviewed eight to 10 coaches:

“There’s been a process that has been ongoing for quite some time and it’s involved talking to other candidates, other coaches. Alain has put himself in a situation and deserved the right to talk to me as the interim general manager, talk to our presidents, our CEOs, our ownership group on selling himself on why he should be able to keep this job. That’s what I meant by how good of a job he’s doing along with what he did during the season. Yeah, those reports are true. I’m not going to hide that that’s what is going on. What I meant (by “nothing different”

An area the Devils hope to improve in

Corey Masisak: New Jersey Devils GM Tom Fitzgerald on one area that he hopes to be able to improve on to help the younger players:

“I definitely think we need to look at the back end. Size, and some hardness, with the ability to move pucks. I don’t think we need anything flashy. I just think we need more of a presence back there. I don’t know who’s going to be out there. You can look at the potential list and get all excited about one player or another player, but at the end of the day things change and we’ve got so much time. Until then, I don’t want to get caught up in maybe potential candidates. But yeah, I do believe we need to look at that and become a bigger and harder defense corps to play against.”