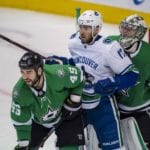 Canucks blue line could have a different look next season

Iain MacIntyre of Sportsnet: (mailbag) The Vancouver Canucks blue line next season could have a different look.

Alex Edler, Tyler Myers and Quinn Hughes will be back but Chris Tanev and Troy Stecher could be cap casualties. Tanev is a UFA and Stecher is a RFA.

Jordie Benn carries a $2 million salary cap hit and they the Canucks are expected to try and trade him. Benn’s money could go to Nikita Tryamkin. Prospect Brogan Rafferty should be given a shot to make the team. If Jack Rathbone decides to go pro, he could be an option as well.

The Canucks could be in the market for a defenseman or two if they can’t get Tanev or Stecher signed to friendly contracts.

Forward Josh Leivo is still rehabbing his broken knee cap but the Canucks had previously said he might be able to play this season.

Luke Fox of Sportsnet: The need for a quality backup goaltender next season may be really important if the NHL has to compress their schedule a bit.

Teams will also have to factor in having at least one goaltender available for the Seattle expansion draft. They need to be under contract for the 2021-22 season or an RFA with a qualifying offer.

1. Anton Khudobin – The Dallas Stars should try to re-sign him given Ben Bishop‘s injury history but it may be hard to fit his cap hit in.

4. Corey Crawford – Likely back with the Chicago Blackhawks. He’ll likely get a short-term deal with bonuses.

5. Aaron Dell – He has a career .908 save percent and likely wouldn’t take a big salary. The youngest goalie on the list at 31-years old.

6. Mike Smith – Could take another $2 million deal with bonuses. If he doesn’t re-sign with the Edmonton Oilers, the Oilers will be in the market for a goalie.

7. Brian Elliott – Could get a one-year offer from the Philadelphia Flyers to continue mentoring Carter Hart.

8. Craig Anderson – Will he take a big pay cut and move his family? Could be a good mentor the Ottawa Senators goaltending prospects.

9. Ryan Miller – Hard to see Miller signing with a team outside of California.