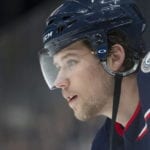 Michael Arace of the Columbus Dispatch: Columbus Blue Jackets forward Josh Anderson missed most of the season after shoulder surgery. He scored only one goal in 26 games before the injury. The Blue Jackets hope to re-sign the pending RFA.

The Blue Jackets and Andersen’s camp have had contract battles in the past, missing training camp a few years ago. He’s a year away from being a UFA and doesn’t have a lot of leverage this time around.

“Anderson would like to stay in Columbus, but he needs a long-term deal to do that. Jarmo Kekalainen may not have the stomach for that, which might fuel more Anderson trade speculation.”

The sides need to find a fair deal, something that may not be easy.

”(Anderson) assured us he does (want to stay). Based on our most recent conversations, I believe he does. We’d love to keep him. We’ve had a good dialogue.

“We have to fit him under the salary cap and within our structure, and those things are important to us. It’s a matter of agreeing what’s fair.”

Washington Capitals Tom Wilson may be a comparable (six years at $5.17 million) but this offseason isn’t going to be a normal one given the pandemic, the cap is flat for a couple of seasons and not many teams have the cap flexibility.

Aaron Portzline of The Athletic: Josh Anderson would have been ready to play in the Conference Finals had the Blue Jackets beat the Tampa Bay Lightning.

Bill Zito had handled a lot of the contracts for the Blue Jackets in past seasons but he’s now the GM for the Florida Panthers. The Blue Jackets and GM Jarmo Kekalainen have a reputation for being difficult to deal with.

“We have the comparables of everybody’s contract and the stats, etc., and everything that affects how we come to a conclusion,” Kekäläinen said. “We present those. If they (the players’ agents) present something that we didn’t take into consideration, we’ll say ‘OK, you’ve got a point.’ If they present something that we feel is totally out of line, we’re going to tell them that, too. Then you either arrive at a contract or you don’t.

“If somebody wants to hold out, go ahead. We’ve been shown that a few times. If you have arbitration rights and we don’t agree, you go to arbitration. We’ve never done that. We’ve always been able to work something out.

“If you’re (an unrestricted free agent) and we can’t agree (on a new contract), well, then, sayonara.”

Pierre-Luc Dubois and Anderson are RFAs this offseason.

Anderson’s agent Darren Ferris said in a text that they’d like a long-term deal.

The flat salary cap may lead to some lower initial contract offers that the players may be surprised with.

“We live in a world now where the cap’s going to be flat,” Kekäläinen said. “It’s a challenging world where you’re going to have to try hard to fit everybody in. At the end of the day, you may not be able to fit everybody.

“It’s difficult and it could be sad, but it’s the world we live in. You have to fit under the cap — there’s no other way around it.”