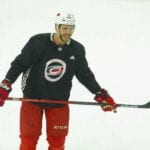 Josh Bogorad: “Anton Khudobin led the NHL in the regular season with a .930 save percentage.

In his first ever Conference Final, he has stopped 119 of 125 shots and elevated that to .952 through the first four games.”

Stephen Whyno: Dallas Stars coach Rick Bowness didn’t have an update on forward Roope Hintz, who left in the first period with an injury.

John Shannon: Bill Daly is done his quarantine time in Edmonton, and Gary Bettman is in quarantine. Both Daly and Bettman were tested in New York multiple times, and they flew to Edmonton on a private jet.

Lamoriello is the 2019 NHL GM of the Year

Lou Lamoriello of the @NYIslanders is the 2019-20 recipient of the Jim Gregory General Manager of the Year Award. Voting was conducted among NHL Club GMs and a panel of NHL executives, print & broadcast media at the end of the Second Round of the Stanley Cup Playoffs. #NHLAwards pic.twitter.com/1gOwgn5nFQ