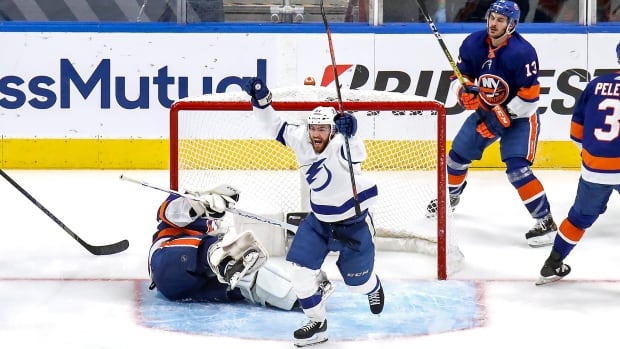 While the New York Islanders were celebrating Brock Nelson scoring the first goal of the game, Tampa Bay Lightning centre Yanni Gourde was steaming about giving it up. Coach Jon Cooper decided to keep him on the ice for some redemption.

“I’m not really happy out there after that goal,” Gourde said. “I’m like, ‘Let’s go back out there and try to have an O-zone shift where we can actually get momentum back.'”

Those big boys were the Lightning’s best players. Brayden Point scored in his return after missing Game 3 before leaving in the third with injury, fellow top liners Palat and Nikita Kucherov set him up for that goal, defenseman Victor Hedman played 29:12 and goaltender Andrei Vasilevskiy made 26 saves.

“All the guys are pretty excited to play for the big prize, but we have business to do here,” said Vasilevskiy, who has played every minute of every Lightning game this postseason. “We have to win the fourth one first.”

Tampa Bay not backing down from anyone

Players from each team had some discussions during pregame warmups, Trotz inserted tough guy Ross Johnston into the Islanders lineup for more tough toughness and tensions rose at times. New York’s Matt Martin shot the puck at the first period horn, earning an unsportsmanlike conduct penalty and inciting some pushing and shoving, but the result hinged more on the play for 27 seconds and two big Tampa Bay shifts.

Point delivered a goal and an assist while clearly playing through some pain. He only took one shift after getting tangled up with Islanders defenseman Adam Pelech early in the third, and his status for Game 5 is a question mark after showing all the reasons he’s Tampa Bay’s leading scorer in the postseason.

“He was all over it,” Cooper said of Point. “He was in on everything and setting up goals, scoring goals and he’s a big part of our team. We have to manage him. It’s the playoffs, and these guys are playing hard, hard minutes. You watch the intensity in these games and they just keep increasing with every game that’s played and every round that’s played.”