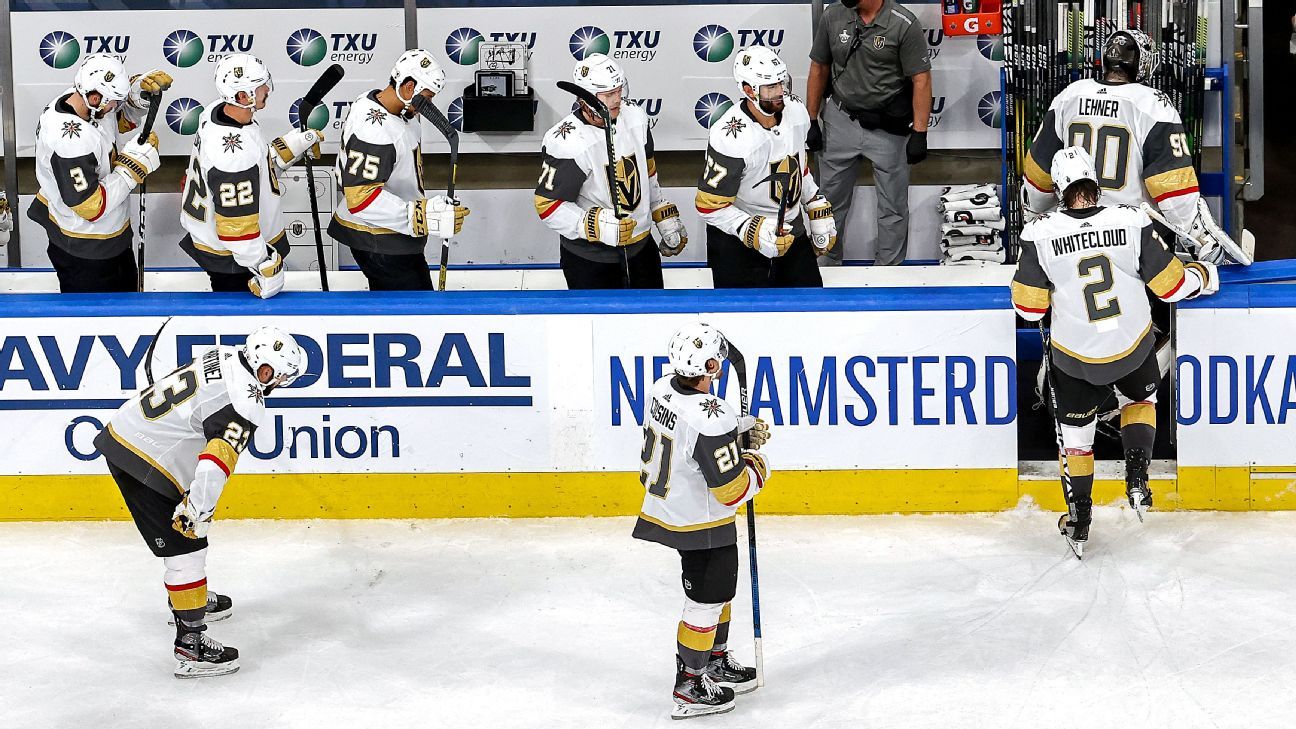 With a suffocating defense and clutch goaltending, the Dallas Stars are one win away from advancing to the Stanley Cup Final for the first time since 2000. But the Vegas Golden Knights vowed that the Western Conference finals are “a long way from over” following their 2-1 loss in Game 4 on Saturday night.

“We’ve been here before. We were in the same exact situation with Vancouver, with a goalie and a team playing like this. We stuck with it. This is a long way from over and we’re going to be a tough out,” said Vegas coach Peter DeBoer, in reference to the conference semifinal series that the Knights won in seven games.

Well, not exactly the same situation. Against Vancouver, the Knights were up 3-1 in the series before Canucks goalie Thatcher Demko allowed just one goal in Games 5 and 6. This time, Vegas is down 3-1 in the series and watching Dallas goalie Anton Khudobin take over. He made 32 saves in Game 4; in the Stars’ three wins, he has allowed one goal or fewer.

“Pretty spectacular performances. Kept us in that game tonight for sure,” Dallas captain Jamie Benn said.

Before the game, the Knights had talked about creating more traffic in front of Khudobin. Were they successful with that in Game 4?

“I guess not,” Vegas forward Reilly Smith said. “It’s frustrating, but we have to stick to our game plan. Getting negative and squeezing your stick too tight isn’t going to help anyone. Stick to our game plan, a little more urgency on pucks when we do find them. We just have to find a way right now.”

DeBoer agreed that the Knights needed more traffic in front of the opposing goalie.

“Obviously, when you score one goal the answer to that is ‘no.’ But I thought we made a better effort to get there. I thought we created some really good looks. I think we hit two or three posts,” he said. “With one goal, we have to find ways to make it tougher on him. But the effort’s there to do that. We had enough looks tonight to extend the lead. We just have to stick with it.”

“He’s a fighter. He’s a battler. He’s a competitive guy. He’s going to battle right to the end,” Bowness said. “When he’s reading the play as well as he was tonight, he’s making a lot of tough saves look easy.”

After Game 3, DeBoer said one way to beat the Stars is to get a lead on them. Alec Martinez‘s power-play goal at 7:44 of the second period did just that after a scoreless first. But Dallas caught a break at 11:34 to tie the game: Vegas defenseman Nate Schmidt turned the puck over, and then Joe Pavelski‘s shot deflected off Schmidt’s flailing stick and knuckle-balled past goalie Robin Lehner (18 saves).

Postgame analysis and highlight show airing each night throughout the season from Barry Melrose and Linda Cohn. Watch on ESPN+

The Stars took the lead on the power play with 59 seconds left in the third, as Benn fired a rebounded puck from the slot to make it 2-1.

The Golden Knights had a 5-on-3 power play in the third period for 1 minute and 10 seconds but couldn’t convert.

While the Stars’ defense has played well, an offensive drought has hit the Golden Knights’ top players, tracking back to the last round. Jonathan Marchessault and Smith haven’t scored a goal since Game 1 against Vancouver, both with two assists in that span. Max Pacioretty, who missed on a pair of great chances in Game 4, has gone seven games without a goal, with one assist in that span. William Karlsson scored in their Game 2 win and had an assist in Game 3, but he’s scoreless in four of six games. Mark Stone, who left Game 4 with an injury and was laboring in the third period after returning, has gone scoreless in five of six games.

“All we need is to finish. The effort’s there. We’re creating a lot of really good looks,” DeBoer said. “Their best player, Joe Pavelski, takes a backhander, it rolls up the shaft of the stick and over our goalie’s shoulder. We haven’t gotten any of those and we gotta stick with it until we do.”

Game 5 of the Western Conference finals is scheduled for Monday in Edmonton, Alberta, with the Golden Knights facing elimination and the Stars eyeing the prize.

“We didn’t come here to win one or two or three rounds. We came here to win the Stanley Cup,” Bowness said. “The focus is entirely on that. We’re not taking our eyes off of that.”