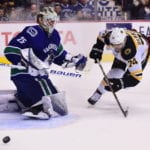 Canucks – Markstrom talked this week but will wait

NHL.com: Vancouver Canucks GM Jim Benning said that they will resume contract talks with pending unrestricted free agent goaltender Jacob Markstrom when their playoffs are over.

“I’ve got a good relationship with Jacob, and you know we talked again yesterday,” Benning told Sportsnet. “We’re going to get something figured out for him. We both decided let’s just wait until after the playoffs are done. We’ll sit down with his agent Pat Morris and with Jacob and we’ll get something figured out. We want to keep him on the team. He’s been a good goalie for us here the last couple of years and a big part of the team.”

Benning added the he doesn’t believe the Markstrom’s playoff performance will have any effect on their contract talks.

DeBrusk on his pending free agency

Joe Haggerty of NBC Sports Boston: The Boston Bruins signed RFA Anders Bjork to a three-year deal earlier this week.  23-year old Jake DeBrusk is another RFA that will be looking for a new deal.

The Bruins will have about $16 million in salary cap space for DeBrusk, Torey Krug, Matt Grzelcyk and Zdeno Chara. DeBrusk has averaged 20 goals over his first three seasons and will be looking for a raise.

Brock Boeser and Travis Konecny are comparables and they’ve already signed for over $5 million per season. Depending on the length of contract they go with, he could be in the $4.5 to $5.5 million range.

DeBrusk after Bjork signed and on a Zoom call with NBC Sports Boston.

“…  I think the quarantine break before now has really changed my mindset on everything and that includes . I’m just happy to be here and happy to be here playing. It’s just great to be here. Obviously, it would be way better if he we had home-ice advantage all through the playoffs. But I want to be a big game player. I think anybody would say that. You want to score clutch goals and come up big in timely moments. It could be a blocked shot. Everybody wants to look at stats and production, but for me it’s about if I’m playing well. That’s what I’m focused on with .”

Hurricanes sweep Rangers with James Reimer between the pipes
Laval to host All-Star Classic in 2022
Penguins beat Canadiens in Game 2 to pull even in series
The Canadiens have an opportunity to be the inspirational underdog story hockey fans need
Aho, Hurricanes secure sweet sweep of Rangers