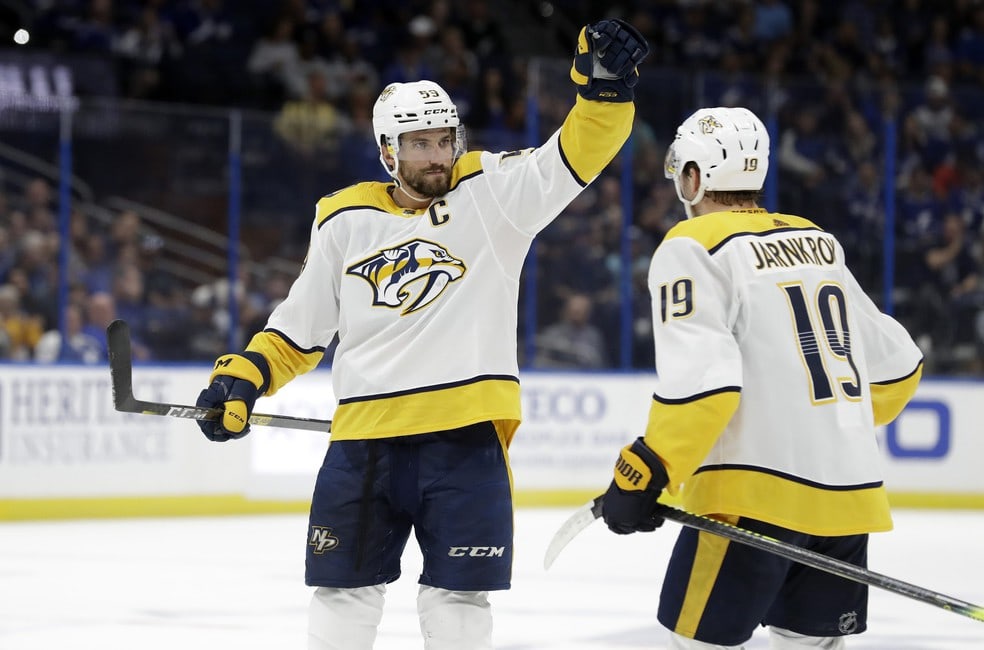 Well, in perhaps one of the least surprising developments of the 2019-20 season, Nashville Predators’ captain Roman Josi was named a finalist for the Norris Trophy, an award signifying the NHL’s best defenseman this season.

Along with the Swiss-born defenseman, the Washington Capitals’ John Carlson and the Tampa Bay Lightning’s Victor Hedman were also named as finalists.

Josi wasn’t the only player who was widely suspected to receive a finalist nod. Carlson had a historic season as a defenseman, so not only is no one surprised that he has been named in the top-three, but many expect him to win the award outright. It may be hard to argue against the predictions that have been around since before even the 2019-20 season’s halfway mark. Carlson registered 75 points in 69 games, which not only led all defenseman this season, but his 1.09 points per game are the highest for any defenseman since 1994.

But had Carlson not torched the league with this rarely seen, sensational season, we might be talking about how Josi is the slam dunk winner of the award. The Predators are, in a nice way, strangers to the NHL Awards. Steve Sullivan won the franchise’s first individual honor when he won the Bill Masterton Memorial Trophy in 2009 and Pekka Rinne won the first skill-based award when he took home the Vezina Trophy in 2018. So, with that being said, we should take the time to appreciate Josi’s Norris Trophy-worthy season.

The 30-year-old defenseman registered 65 points, the most the franchise has ever seen from a defenseman in a single season. What’s more, he did it in just 69 games. Josi’s point total not only led all Predators defensemen, but also the entire team. Filip Forsberg finished second with 48 points, a little quick math indicates that’s 17 points less. And he’s a forward!

There are some impressive accomplishments when scanning through Josi’s game breakdowns. The captain had 13 two-point games, three three-point games and four two-goal games. He finished the regular season with 16 goals, which is impressive, but most of his offensive damage came via assists.

Josi tallied 49 assists, which is the fourth-highest in franchise history. Ryan Johansen had 50 assists in 2018-19 but played in 80 games. The legendary Paul Kariya holds the top-two spots with 54 in 2005-06 and 52 in 2006-07, both seasons he played all 82 games. So, while Josi may not possess the team’s single-season assist record, his assists per game average have everyone beat.

His 49 assists in 69 contests give Josi an assist per game average of 0.71, which beats the previous franchise record of 0.66 set by Kariya in 2005-06. It may be safe to say that had the season continued and Josi played the remaining 13 games, he would have sat alone on top of the list for most assists by a Predators player in a single season.

His points per game average also set a franchise record for a defenseman, averaging 0.94. As an interesting side note, the defenseman that holds the second spot is Ryan Ellis, with an average of 0.78, also set in 2019-20.

The Predators have had some fantastic defensemen in their franchise. The team has long been known – and envied – for the riches they’ve had on their blue line. For Josi to break so many of the team’s records really shows you what a phenomenal season it was for him.

What doesn’t receive credit, and should be noted, is the All-Star’s consistency and reliability. When looking at Josi’s home performance versus his road performance, there really are no weaknesses. In 35 home games, Josi scored nine goals and registered 19 assists. On the road, often a tougher environment resulting in the expectation of slightly lower numbers, he recorded seven goals and 30 assists in just 34 games. Yes, more than a point per game.

Josi is not just an offensive superstar, as his numbers show. Just watch a Predators game and you’ll notice that he doesn’t slack in his own end of the ice either. The veteran defenseman finished the season with a plus-22 rating, despite playing against the opponent’s top players on a nightly basis.

However, there have been complaints that plus/minus stats are pointless when evaluating the quality of a player and that can be true. But it’s a useable stat, a stat that can show defensive efficiency and one that has been kind to Josi. However, to be fair there are several stats that have been less than nice to all the Norris Trophy finalists.

This is fairly interesting and should be addressed. Why? Well as you’ll see, the defensive stats may be seen as a smudge on Josi’s season, but they shouldn’t be.

The Defensive Elephant in the Room

Look, can we admit that today’s NHL is an offensive league? This is not to say that’s a bad thing. It’s seen throughout the world of sports, from the NFL with quarterback and receiver protections to the NBA with limited contact compared to the style of the past.

The game has transitioned to the belief that offensive, high scoring games are good and defensive chess matches are bad, well if they happen too often. So, it’s tough to pile up overwhelming stats to convince fans and critics that a defenseman had a great defensive season.

In comparison to other defensemen with a minimum of 500 minutes of time on ice, none of the Norris Trophy finalists faired very well statistically in 5v5 play.

The expected goals against per 60 didn’t fair much better either. None of the finalists finished in the top-30. Hedman was 37th, Josi was 65th, and Carlson was 145th, that’s right 145th. That’s not a typo.

But, as a fan, and salary cap aside, would you reject any of these three players from your team?

It’s easy sometimes to be told how good a player is by looking at stats alone. But that’s not what hockey, or sports for that matter, should be about. Sure, stats are useful and serve a purpose, but the eye test must and needs to count for something. With the edge given to the offense, it can be difficult to point to what good defense is, but you know what it isn’t.

The point here is defense is situational. Top defensemen play the most minutes against the opponent’s top players.

So, when looking back at Josi’s season, see it for what it was beyond the defensive stats. The numbers may suggest that he’s a one-dimensional type of player who is phenomenal in the offensive zone but is suspect in his own end. However, that couldn’t be further from the truth. It may be hard to argue against Carlson. His offensive numbers were otherworldly, and his defensive stats were as misleading as Josi’s. But he’s a number one defenseman for the Capitals also playing against the opponent’s best.

It’s sad to think that Josi may not receive the honor of being called the league’s best defenseman, and if he doesn’t, just remember that his 2019-20 regular season was spectacular, and we all witnessed something special.