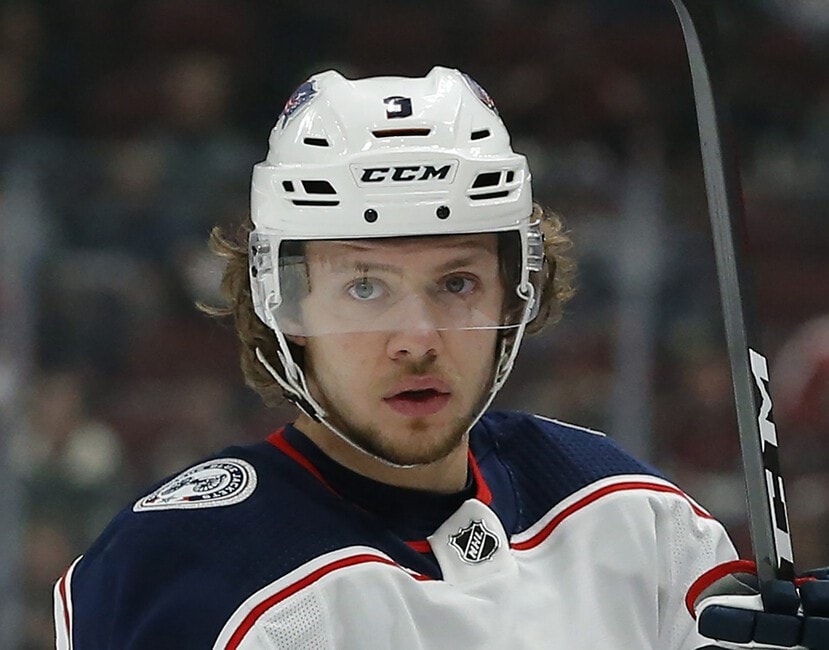 Bread anyone? It’s been approximately 36 months since the Russian sensation and “Bread Man”, Artemi Panarin, was traded to the Columbus Blue Jackets in a move that sent shock waves across the National Hockey League. One year removed from claiming the Calder Memorial Trophy, awarded to the league’s best rookie, Panarin was on the move.

Panarin was a key member of the Chicago Blackhawks playing on one of the most productive secondary lines with the one-and-only, Patrick Kane, and fellow Russian, Artem Anisimov. Kane would often say that his own production was a testament to the strong, consistent play of Panarin. That’s quite the compliment from one of the most talented players the league has ever seen.

Panarin’s speed, skill set, “soft hands”, and a knack for goal-scoring made him an instant threat in the NHL. It’s no surprise that he found immediate success with Kane. However, that stunning trio that experienced so much on-ice success was soon separated, and to the surprise of many, Panarin was moved to the Blue Jackets. Let’s take a closer look at how this move came to be.

On June 27, 2017, Blue Jackets general manager Jarmo Kekalainen pulled off an improbable deal and brought Panarin, forward Tyler Motte, and a sixth-round draft pick in the 2017 NHL Entry Draft to Columbus. The other side of the deal saw forward Brandon Saad and goaltender Anton Forsberg head to the Windy City along with a fifth-round draft pick in the 2018 NHL Draft. At first glance, both sides seemed to be pleased with their returns. Chicago GM Stan Bowman brought back a fan-favorite in Saad, a productive winger who played an integral role in their 2013 and 2015 Stanley Cup triumphs.

On the other side, the Blue Jackets landed a massive (and proven) offensive weapon in Panarin, something they had been missing since the departure of long-time captain Rick Nash. Tyler Motte, who has since moved on to the Vancouver Canucks, played 31 games in a Blue Jackets uniform, tallying just 3 goals and 2 assists. Anton Forsberg played 35 games for the Blackhawks in 2017-18, before being traded to the Carolina Hurricanes in the summer of 2019.

Columbus used their sixth-round pick to draft Swedish forward Jonathan Davidsson, 170th overall. Davidsson was dealt to the Ottawa Senators in Feb. 2019, and has played his entire professional career for Djugardens in the Swedish Hockey League. The Blackhawks, on the other hand, traded their pick to the Arizona Coyotes before the 2018 NHL Entry Draft.

All in all, smiles were abundant in the Blue Jackets organization, and when the dust settled, it was time to look ahead to the 2017-18 campaign. This time, however, they had added “pep in their step”. One of the largest deals in Blue Jackets franchise history provided the hockey-crazed fans in Columbus with a superstar they could call their own.

First Year as a Blue Jacket

Donning a crisp new uniform and wearing the silver, blue, and red logo of the Blue Jackets, Panarin hit the ground running in his first season. On a chilly December evening in Newark, New Jersey at the Prudential Center, Panarin notched 5 assists as the Jackets defeated the New Jersey Devils by a score of 5-3. Following Espen Knutsen’s tally of 5 assists in 2001, Panarin was just the second player in franchise history to record 5 assists in a game. He was also only the fifth player to tally 5 points in a game in franchise history.

Post-game, Panarin maintained a positive and modest disposition: “I’m very happy. However, I try to keep my emotions in check. Tomorrow’s another game and I know this is just a sport and sometimes you do the same and it doesn’t result in a goal.”

At season’s end, the Bread Man finished with 27 goals and 82 points in 81 games, and he and his mates had an even better and more memorable season in 2018-19.

During the 2019 NHL Playoffs, Panarin and the Blue Jackets shocked the hockey world and pulled off one of the most improbable upsets in North American professional sports history. After posting career-highs in both assists (59) and points (87) to date, Panarin and the Jackets squeaked into the postseason as the Eastern Conference’s second wild-card team. Their first-round opponent? The mighty Tampa Bay Lightning, coming off one of the most successful regular seasons in NHL history.

The Lightning entered the series as heavy favorites after sporting a 62-16-4 regular-season record to go along with 128 points and a plus-103 goal differential. After being down 3-0 in the first period, the Jackets roared back, stunned the Bolts, and scored four unanswered goals to take the all-important first game in Tampa by a score of 4-3.

The rest, as they say, is history. Under the leadership of head coach John Tortorella and the massive trade deadline acquisitions of Matt Duchene and Ryan Dzingel, the Jackets were “all-in” heading into the playoffs. For all intents and purposes, the gamble paid off, as the Blue Jackets sent the Lightning packing, and swept the series 4-0. The celebrations, however, were short-lived, as the Blue Jackets fell to the big, bad Boston Bruins in the second round.

Regardless of the sting of losing, and notwithstanding the untimely end of the season, Blue Jackets fans entered the hot summer months with their heads held high. It’s safe to say that Kekalainen and the Jackets’ front office was pleased with the return they got on their investment in the Panarin trade in June 2017.

July 1 is an exciting time in the NHL when unrestricted free agents (UFAs) are free to sign with other teams. In Panarin’s case, that team was the New York Rangers. On July 1, 2019, Panarin signed a lucrative 7-year, $81.5 million contract, with an average annual value of $11.642 million, and broke the hearts of Blue Jackets fans everywhere. To add insult to injury, the Jackets also lost Sergei Bobrovsky, Matt Duchene, and Ryan Dzingel, who all decided to take their talents elsewhere via free agency.

It was a tough pill to swallow for the Blue Jackets, who essentially “went for it all” at the trade deadline in hopes of securing a spot in the postseason. Well, they did much more than that. Looking back at Panarin’s tenure, Blue Jackets fans must miss his flair, electricity, and on-ice productivity that he gave them for two years. That first-round upset of the Lightning will be remembered for generations. The “Bread Man” will always be remembered for what he meant to the beautiful city of Columbus, Ohio on and off the ice.