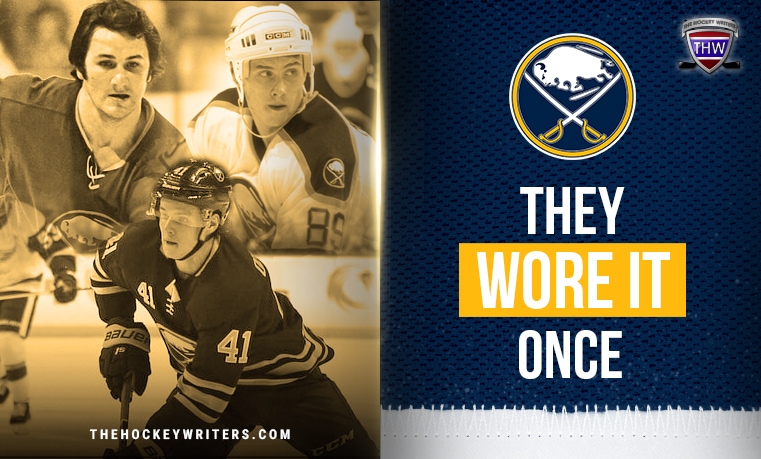 As hockey fans, we love to pour over the numbers. Analyzing stats, finding trends and predicting future outcomes are some of the things that make hockey and sports enjoyable.

Numbers are found everywhere in this sport. From stats and records to attendance and revenue, the life of a hockey fan is consumed by numbers. They are even proudly displayed on the backs of the players’ sweaters.

Before he became one of the greatest goaltenders in team history who’s now a media darling, Biron was an unheralded rookie goaltender. He only played three games wearing 00 and had an unremarkable 0-2 record with a .844 save percentage and a 5.05 goals-against average

Interestingly, only two players since 1951 have worn 00 in the NHL. In addition to Biron, John Davidson wore 00 in 1978 while playing goal for the New York Rangers. The number is no longer allowed to be worn and remains one of the most unique to appear on an NHL sweater.

Arguably the greatest player in franchise history, the No. 11 will only ever be stitched on a blue and gold sweater for one player. Perreault was the first player ever drafted by the team, and he holds many franchise records, including the most points scored donning the Sabres colours.

In the 1970 NHL Draft, the Vancouver Canucks and Sabres had an equal chance to pick first overall. Each team was assigned a number and the pick was decided by spinning a wheel. The wheel landed on eleven which belonged to the Sabres. From then on, No. 11 and the Sabres were synonymous and etched in NHL history.

Lieuwen was one of a plethora of forgettable players from the Sabres’ 2013-14 roster. Drafted in the sixth round of the 2011 NHL Draft, expectations were never high for the goaltender. He appeared in seven games for the organization and managed to pick up one win with one of the worst collection of players in team history. The team had a .317 points percentage, the lowest in franchise history. His play on the ice was forgettable, but his No. 50 will live on in all our hearts – at least until someone else wears it.

Kassian was the perfect pick for the Sabres, a team that notoriously lacked toughness and still needed an infusion of skill. He brought his brash style to the team and became a fan favourite. After only 27 games, however, his career as a Sabre was complete.

He was traded along with his No. 54 to the Canucks for Cody Hodgson. Neither player ever really prospered with their new team. Hodgson is no longer playing in the league but Kassian is with the Edmonton Oilers, occasionally riding shotgun with Connor McDavid. What seems like 54 years later, Kassian maintains his place in Sabres’ history.

Schaller was a free agent signing out of Providence who appeared in 35 games for the Sabres and collected 5 points. He has since had a solid career with the Boston Bruins, Canucks and Los Angeles Kings. He is another player who, while he didn’t make a major impact, holds a special place in Sabres’ history as the only player to wear No. 59.

Gaustad holds the record for the shortest time wearing a unique number for the Sabres. Although most will remember him as No. 28, he spent just under six minutes of a game against the Colorado Avalanche in 2003 wearing the number 60.

After the 2004-05 lockout, Gaustad wore his famous No. 28 and became a regular fixture in the middle of the ice. His faceoff ability and defensive prowess were appreciated. Most will remember him as No. 28 but very few will remember No. 60.

We’ve reached the first of two current Sabres who wear unique numbers. Montour joined the team in 2018 in a near trade deadline deal with the Anaheim Ducks. He most consistently wore No. 26 with the Ducks, and there was curiosity as to what number he would wear in Buffalo since Rasmus Dahlin already wore that number.

Montour decided to go the route of many NHL players and switched the numbers around. Whether or not he knew it, he was writing a page in Sabres history. While it stills seems strange to see a defenceman wearing No. 62, it’s uniqueness seems fitting given the state of the team.

Ennis will be a longtime favourite for Sabres fans. The diminutive forward made his way on to the NHL scene with the Sabres after being drafted 26th overall by the team in 2008. He gave the Sabres his best seasons. He was a leader on several bad teams and made the best of it. In 419 games with the team, he compiled 236 points, none more memorable than this one:

Ennis has continued his career with the Minnesota Wild, Toronto Maple Leafs, Ottawa Senators and Oilers. A free agent at the end of the 2019-20 season, perhaps the Sabres should be reunited with their only No. 63 to add some depth offence.

Moravec is one of 12 players to only play one game for the Sabres. He’s also the only player to parade the No. 64 around the ice. In the history of the organization, that number was seen in blue and gold for just over 15 minutes in a game against the Detroit Red Wings on Oct 2, 1999. Moravec, wherever you are, thank you for giving us something interesting to think about during the Sabres’ longest offseason ever.

Olofsson is the second current member of the Sabres to support a unique number. When he arrived at the end of the 2018-19 season, he was wearing No. 41. Once he knew he had a more established place on the team, he switched to No. 68.

He explained to WGR’s Paul Hamilton that he chose the number because he simply liked the way it looked and that his father was born in 1968. We sure like the way he looks in No. 68 as well. Let’s hope he wears that number for the Sabres for a long time.

Nylander was afforded very little opportunity to make an impact with the Sabres. He only played 19 games with the club, spending 116 games with the Rochester Americans. In seven of those 19 games, he donned the No. 70. He scored the first goal and first assist of his career wearing that number, which should be special for him and he remains a part of Sabres’ history as the only player to wear it.

Baptiste was a solid player in the OHL and his play built a decent amount of excitement in Sabres fans anticipating his eventual graduation to the team. He has never been able to get a firm grip on an NHL job, unfortunately, having played just 47 NHL games and 265 AHL games. One of many lost prospects in the last decade, Baptiste at least made an impact on this article by being the only player in team history to wear the No. 73.

Another casualty of the deluge of ineptitude the last decade has been for nearly every aspect of the organization, Tropp put up nine points in 43 games for the Sabres. After the Sabres placed him on waivers on Nov 28 2013, he found a home with the Columbus Blue Jackets and played 105 games for that organization. As faceless as his time with the Sabres was, he still holds the record for the most points ever scored by a No. 78.

Pittis is another interesting player in Sabres’ sweater history. In two separate stints spanning just three seasons and only 14 total games, Pittis managed to wear the Nos. 83, 28, 12 and 38 – an astounding rate of three and a half games per number! He averaged a new sweater every 38 minutes.

Although he is an Americans legend, injuries and numerous call-ups limited his time with the Sabres. I suppose the more often you switch numbers the more likely you are to eventually pick one so random that you end up in an article for The Hockey Writers two decades later.

Like so many before him, Varone is one of the lost prospects of so many lost seasons. We may forget the nine points he put up in 42 games, but we will never forget how…well…maybe we will just forget everything.

Finally, a player of consequence. Mogilny is an NHL legend and may one day have his No. 89 retired by the Sabres. Drafted 89th overall by Buffalo in 1988, he compiled an impressive 444 points in 381 games with the organization. The pinnacle of his career was the 1992-93 season when he totalled 76 goals and 127 points in just 77 games.

Mogilny made an impact on the game throughout his career. In recent years, there have been more and more rumblings about his worthiness to be inducted to the Hockey Hall of Fame. That time will come. In the meantime, Sabres fans can bask in the glory of all things No. 89 and hope that someday they can find someone worthy of carrying that number once again unless they retire it.

Our 17th and final unique number mark the only player to make his second appearance on this list. With hopes of keeping a regular spot in the NHL, Nylander dropped his No. 70 after just seven games and went with his father Michael’s No. 92. Perhaps he felt that by choosing his own number instead if simply using the one he was given he could garner more respect. As excellent as it looked aesthetically, his four points in 12 games didn’t inspire much confidence. Now with the Chicago Blackhawks, Nylander will be remembered in Buffalo for wearing two unique numbers.

Which Numbers Are Next?

Would the Sabres dare to slap a No. 66 on a hot-shot prospect? Could they throw a No. 86 to a nice young sniper? Maybe they can find an offensive winger and stitch a 90s number to his sweater. Whatever the case, the franchise could get a little more creative with their sweater number distributions. Just add it to the list of things they need to do better.