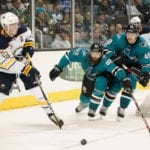 Who the Sharks may protect for the Seattle expansion draft

Kevin Kurz of The Athletic: For the Vegas expansion draft, the San Jose Sharks got a little lucky as they lost David Schlemko and not Brenden Dillon or Barclay Goodrow.

This go around with the Seattle expansion draft, the Sharks may be hoping that they are able to lose a bigger salaried player.

There is obviously lots of time before the draft and lots can change, but an early look at the Sharks situation.

Erik Karlsson and Marc-Edouard Vlasic have to be protected due to their full no-movement clauses.

Defensemen: Brent Burns has four years left on his deal at $8 million, a limit no-trade clause could be left unprotected if they can’t move Vlasic’s contract and want to possibly reduce their salary. If Burns is left unprotected, and they still have Karlsson and Vlasic, they could protect Radim Simek.

Goaltender: If Martin Jones is still with the team, they could expose him and protect someone else.

What it might cost the Sharks if Jack Eichel became available

Brian Witt of NBC Sports Bay Area: Buffalo Sabres forward Jack Eichel has made his frustration of losing public. If he were to ever request a trade, every team would be calling the Sabres to see what the price would be.

Mike Johnson of NHL Network said it would be a hard deal to make, and the Sabres would likely want at least a young NHL player, a first-round pick and two top prospects.

For the San Jose Sharks, there would need to be some salary going back to Buffalo. Though it may not be enough, a potential package could include Brent Burns (for salary), Ryan Merkley, Jonathan Dahlan, and a future first-round pick. If not Burns (he is 35 and has a modified NTC), maybe Timo Meier.