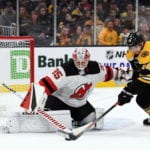 DeBrusk on free agency … Could he become trade bait if Krug re-signed?

Joe Haggerty of NBC Sports: Boston Bruins forward Jake DeBrusk is a pending restricted free agent and has averaged 20 goals and 40 points in his first three seasons in the NHL.

DeBrusk on his pending free agency.

“Obviously that’s going to be my situation . Hopefully not , but maybe, possibly next year just looking around the league you see different things with guys dragging it out,” said DeBrusk, who will be joined by Matt Grzelcyk and Anders Bjork as restricted free agents for the Bruins. “It’s one of those where you ask questions on the business side of it. Things change and different stuff happens with talks, but at the same time I mostly just try to stay out of it. I try to stay dialed in to get ready for training camp and the season. I guess when that time comes, though, I’ll be more aware of what to expect.”

Travis Konecny could be a comparable, who signed a six-year, $33 million deal. Brock Boeser has produced more and has a higher upside had signed a three-year, $17.625 million deal.

DeBrusk could be looking at something in the $4.5 million per season range. A flat salary cap will give the Bruins some trouble.

If the Bruins do re-sign defenseman Torey Krug to a deal in the $7 to $8 million range, it may mean there isn’t enough room to extend DeBrusk and they could look to move him. The Bruins have a list of free agents and all won’t be back.

Corey Masisak of The Athletic: (Looking at some good and maybe good blue line options for the New Jersey Devils)

The New Jersey Devils will be in the market to improve their blue line this offseason.

Looking at some potential “risky options” they may consider.

Flames D Hamonic first to opt out of restart
Game on: NHL labour peace points to playoffs starting Aug. 1
10 lingering questions about the NHL return-to-play bubbles
Blackhawks stand by name, commit to ‘expand awareness’ on Indigenous contributions
The biggest NHL playoff goalie dilemmas — and who should get the start