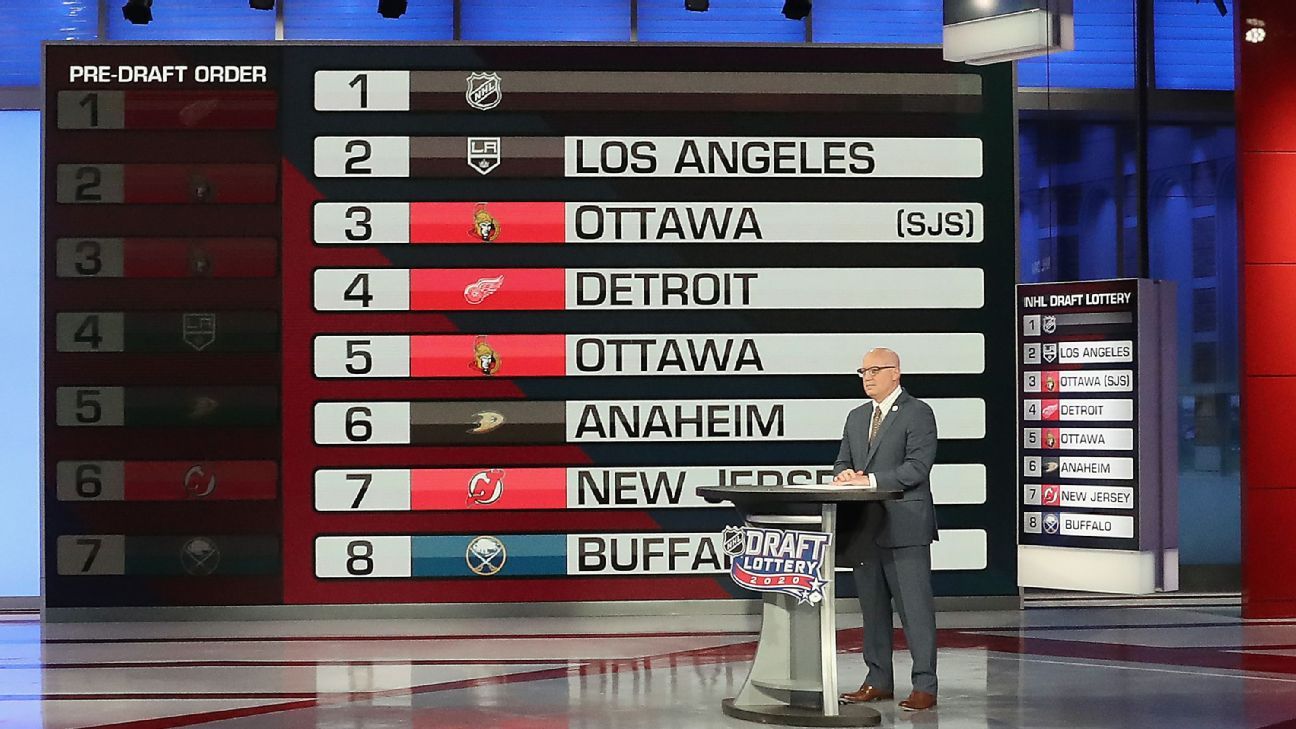 The 2020 NHL draft lottery was held on Friday night, and the winner of the first-overall pick is still to-be-determined. That’s right. The No. 1 selection will be made by one of the teams participating in the play-in postseason round and is set to be determined by a second lottery after the qualification round.

While the top spot is still up for grabs, we do know which teams will be drafting in spot Nos. 2-8. Some teams won big (Los Angeles), and some can’t be too happy with the outcome (Detroit). Greg Wyshynski and Chris Peters pick out some winners and losers of the first lottery, and answer the biggest looming questions ahead of the second lottery and, ultimately, the draft. Let’s get started.

We still don’t know who will pick No. 1 overall?

Wyshynski: Correct. The NHL regular season is over as of March 11, but eight teams that weren’t in playoff seeds at the time of the pause will continue on in the 24-team postseason tournament – should the players approve a return to play. So the NHL came up with an inventive way of ensuring that teams in the qualifying round still had a shot at the top three picks: having eight “placeholder” spots in the draft lottery, none of them having better than a 6% chance of winning the draw.

And one of them did.

So what happens next?

Wyshynski: After the qualification round of the playoffs, which pairs up the bottom-eight teams in each conference in five-game series, there will be a second lottery drawing featuring the teams that are eliminated in that round. Each will have a 12.5% chance of securing that first overall pick — better odds than all but two of the teams in the lottery we just witnessed. Essentially, consensus top prospect Alexis Lafreniere could be drafted by eight teams that were outside the playoffs, or eight teams that were in playoff spots when the season was paused based on points percentage.

Which teams are now eligible for the first-overall pick?

Wyshynski: In the Eastern Conference, the matchups are: No. 5 Pittsburgh Penguins vs. No. 12 Montreal Canadiens; No. 6 Carolina Hurricanes vs. No. 11 New York Rangers; No. 7 New York Islanders vs. No. 10 Florida Panthers; No. 8 Toronto Maple Leafs vs. No. 9 Columbus Blue Jackets. In the Western Conference, the matchups are: No. 5 Edmonton Oilers vs. No. 12 Chicago Blackhawks; No. 6 Nashville Predators vs. No. 11 Arizona Coyotes; No. 7 Vancouver Canucks vs. No. 10 Minnesota Wild; No. 8 Calgary Flames vs. No. 9 Winnipeg Jets. The teams that lose in those series will drop into the second draft lottery.

There are some teams that have traded conditional first-round picks. The Canucks, Islanders, Penguins and Coyotes will retain their picks this season if they are eliminated in the qualification round and win the first overall pick in the lottery.

If the Leafs lose in the qualification round and win the lottery, they get to draft Lafreniere, a.k.a. “elite talent with an entry level contract on a cap-strapped team.” The Rangers would then get the Hurricanes’ pick. If the Hurricanes lose to the Rangers but win the lottery, the Rangers would get the Leafs’ first-round pick, even if the Leafs lose their qualification round match. (With a .579 points percentage, it’s impossible for Toronto to secure a top-10 pick unless it’s the first-overall pick.)

The Rangers can also, of course, win the lottery on their own.

OK, but what if the season isn’t completed?

The Red Wings and the Senators, the teams with the best odds to acquire the consensus No. 1 prospect for the draft, are still in the midst of rebuilds, and Lafreniere isn’t headed to either. The lottery guaranteed that he will not to go to one of the league’s worst teams, meaning he does not have to come in and be the face and have even more pressure than your average No. 1 pick. Depending on how the play-ins shake out, Lafreniere very well could land on a team that was actually in the playoff picture in a normal season. — Peters

The Kings may be able to add the crown jewel to their rebuild by landing the No. 2 pick in this draft. They already have one of the deepest prospect pools in the league, but the No. 2 pick is going to jump to the No. 1 prospect in that group. If I were in Rob Blake‘s shoes, Quinton Byfield is the easy choice for me, given his potential, size and speed. He’s built for the modern NHL and would fit remarkably well into the kind of team the Kings have been building. — Peters

Outside of winning the Hart Trophy that one year, Hall is best known as the draft lottery’s greatest good luck charm. Between the Oilers and the Devils, he’s been on five teams in nine seasons that won the lottery. Should they lose in the qualification round, the Coyotes would have a shot at the first overall pick. We can only assume The Taylor Hall Effect is why a placeholder team won the lottery. — Wyshynski

Having the worst record in the NHL by a long shot did not get Detroit any closer to landing a potential franchise-changing prospect. They’re going to get a really good player at No. 4, as the top 11 or so of this draft is really stacked, but it’s not going to be near the quality they could have had at No. 1 or No. 2. Lafreniere or Byfield would have been excellent pre-packaged stars. — Peters

He doesn’t have to play on the worst team, but his future is no clearer. This matters on a number of levels. Had any of the teams we expected to get the top pick actually landed it, they could have at least started the conversation with Lafreniere about his plans for next season. There’s still a chance that the draft happens after next season begins for leagues outside of the NHL. Would Lafreniere go back to junior, sit out or find an alternative? There is no clear answer there, and that means less certainty about his next moves. — Peters

Getting two cracks at No. 1 and not landing either of them is tough. I think the Sens are going to end up with a package of players that is going to make a very deep prospect pool better. But to have two excellent opportunities at No. 1 and landing at Nos. 3 and 5 stings just a little. — Peters

This was a classic case of “be careful what you wish for.” The NHL wanted a draft before the season was restarted. Some NHL general managers were adamant about not creating a format in which a team could win the lottery and win the Stanley Cup in the same season. So they invented this “double lottery” thing, and wouldn’t you know it: A team that “made the postseason” is going to end up drafting a phenom. — Wyshynski

How was the presentation of the NHL draft Lottery during a pandemic?

Wyshynski: Due to the coronavirus pandemic, the broadcast had a different look. Rather than being held in Toronto, the broadcast originated from Secaucus, New Jersey. And rather than having representatives from each team on stage to react in real time, they joined the broadcast remotely via video conference.

The NHL also took a page from the NFL draft in giving a nod to fans and frontline workers in the pandemic, with first-responders and medical professionals representing the seven non-postseason teams being featured. So it was a little different, but in the end, it was still Bill Daly flipping over placards, which is what we came for.

Emily Kaplan and Greg Wyshynski take you around the NHL with the latest news, big questions and special guests every episode. Listen here »

What is the eventual lottery winner getting out of the top spot?

Peters: It’s always good to have one of the first three picks, but this year there is potential for those teams to add a foundational player to their prospect pools. Lafreniere is the consensus No. 1, having built a strong case over the last three seasons as a highly-decorated and productive player. He’s a wing who checks a lot of boxes for what teams look for in a top prospect, with elite skill, good physicality and competitiveness, and an NHL-ready game.

Lafreniere joined Sidney Crosby as the only players to win the CHL Player of the Year Award twice. He has been an absolutely dominant player in junior hockey, and his MVP performance at the 2020 World Juniors was another example of how exceptional he is compared to his peers.

How does Lafreniere compare to other recent top prospects?

Peters: In a review of top-two picks of the last five drafts, I ranked Lafreniere fourth behind Auston Matthews, Patrik Laine and Jack Hughes . One of the biggest differences between Lafreniere and the last two No. 1 picks (Rasmus Dahlin and Hughes) is his NHL readiness. Lafreniere should be able to jump onto any team right away and be an instant contributor — especially with all of this added time to build up strength.

Of the teams eligible to pick first, which needs Lafreniere the most?

Peters: Any team can use a winger like Lafreniere, who does so many things well. But if we’re looking up and down the remaining teams that are part of the play-ins, the Blue Jackets could really use another weapon up front.

Having lost Artemi Panarin after last season, Lafreniere makes for a very interesting replacement. He would help a team that’s a little lighter on star power but also fit in seamlessly with a core that includes Seth Jones and Zach Werenski anchoring the back end. He’d also probably be a really good fit with John Tortorella in terms of the tenacity he plays with on top of the skill.

However, could you imagine the insanity of Lafreniere ending up with the Canadiens, who could also use another young talent up front? The best Quebecois prospect in years going to the bleu, blanc et rouge would certainly inject a little extra excitement for the league’s oldest team, eh?

OK, what about the Kings and Senators? What can they expect from their second and third spots, respectively?

Peters: Byfield is my No. 2 prospect, and as one of the younger players in this draft class, he is a big bet on upside. Byfield is big, he’s fast and he has some incredible skill. He could be an elite power center if he keeps rounding out on his current development arc.

My No. 3 prospect is Tim Stutzle, who lit up the German pro league this season and has a tantalizing package of speed and skill. He needs to get stronger before he can make an NHL impact, but his offensive capabilities put him on track to be a catalyst in the right situation.