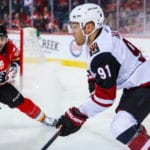 TSN: Arizona Coyotes coach Rick Tocchet was on an ESPN podcast and said that he thinks pending unrestricted free agent forward Taylor Hall is interested in staying in Arizona.

“I’m not saying he is going to sign here, but I definitely think we’re a team he’s very interested in staying with,” Tocchet told the ESPN On Ice podcast this week.

Tocchet added that there had been some speculation about some free agents signing a one-year deal and then looking to make more the following year when the dust settles a bit, but Hall isn’t interested in doing that.

“You’re talking about a guy who, before this, was going to make a ton of money,” Tocchet said. “With this whole pandemic, like he told me, he doesn’t want to go through another year trying to play on a one-year contract. He wants to get settled somewhere. So he’s got a lot of different options that weigh.”

Hall’s camp and the Coyotes have spoken

Matt Layman of Arizona Sports: Taylor Hall said the sides have talked a bit, and that they will see where things go.

“I think it’s a tough spot to be in. I’ve had a great time playing with the Coyotes and meeting everyone here and talking to John and Rick and the coaching staff,” Hall told Tirico. “I think we have a great relationship. But with everything going on, we don’t know what the outlook is for the future and I think both sides are talking a little bit, but it’s important to know what the future looks like and to know when free agency could possibly be and what the outlook is.

“So there’s still time to have those talks and I think we have a really good relationship on both sides so we’ll see where it goes.”