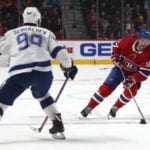 Eric Engels of Sportsnet: (mailbag) On the idea of the Montreal Canadiens trying to offer sheet Tampa Bay Lightning defenseman Mikhail Sergachev this offseason. If the Lightning were able to get Sergachev signed long-term in the $4.2 to $6.4 million (suggested range), they would definitely match it.

The Lightning will have to move some salaries out as they also have to re-sign RFAs Anthony Cirelli and Erik Cernak. They have 15 players under contract at just over $76 million already.

A compliance buyout would help but they still may need to move out a contract. Potential players who could be on the move include Ondrej Palat, Alex Killorn, Yanni Gourde or Tyler Johnson.

If the Canadiens really wanted Sergachev, it would likely have to be a deal around $8 million, which would put compensation at a first-, second-, and third-round pick. Don’t see the Canadiens wanting to do that.

The Canadiens could look at taking advantage of their salary cap space and landing one of the Lightning’s forward though.

Tomas Tatar would be an unrestricted free agent after next season. If he kept up his play, he’d likely be pricing himself out of Montreal. The flattening of the cap and plenty of uncertainty around the may mean that a four- or five-year deal at more than $6 million may no longer be an option going forward.

Before the trade deadline, Canadiens GM Marc Bergevin was in Colorado, with Avs GM Joe Sakic saying Bergevin’s extended stay was for Bergevin’s visiting his daughter at Colorado University. Canadiens assistant GM Scott Mellanby was also there. couldn’t nail down anything between the two teams. Ideas for an offseason trade could have been started. Can see them be a good fit to make a deal.

Keith almost dealt to the Flyers a long time ago

Mark Lazerus of The Athletic:  Former Chicago Blackhawks GM Mike Smith said a ‘grapevine thing’ (rumor) years ago was that then-GM Bob Pulford was really close to trading then-prospect Duncan Keith to the Philadelphia Flyers for 34-year old Jeremy Roenick and 34-year old Tony Amonte. The lockout of 2004-05 basically prevented the deal as trades were not allowed. Keith played in the AHL and had a really good year, and made the Blackhawks the following year.