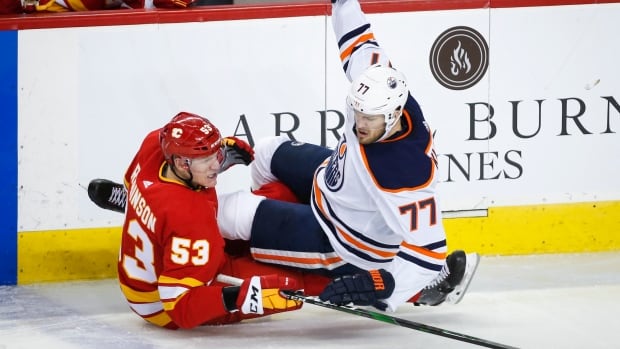 The Edmonton Oilers and Calgary Flames have announced temporary staff reductions because of the COVID-19 pandemic.

The moves on Monday come with nearly all major sports leagues and events suspended because of the novel coronavirus.

The Calgary Sports and Entertainment (CSEC), which owns the Flames, the Western Hockey League’s Hitmen, the National Lacrosse League’s Roughnecks and the CFL’s Stampeders, will have a 60-day temporary layoff for certain personnel as well as salary rollbacks.

The company says about 150 employees, representing about half of its full-time staff, have been given two weeks notice of the layoff, which will be effective April 13.

WATCH | What could playoffs look like if NHL returns?

While the NHL is on pause because of Covid-19, Rob Pizzo looks at what could happen if the league starts back up again this season.  3:20

The remaining staff will see salary reductions ranging 10 to 25 per cent.

Oilers Entertainment Group (OEG), which owns the Oilers and Western Hockey League’s Oil Kings, says it will have a temporary staff reduction of 139 employees, effective April 13, as well as a compensation rollback for all other staff.

CSEC says the rate of its salary reductions rises with salary levels, with executive management receiving the highest percentage rollbacks.

It also says employees affected will receive a top-up payment from Employment Insurance.

OEG, meanwhile, says it has created employee assistance funding to help its staff. Combined with government programs, OEG says staff will receive anywhere from 75 to 90 per cent of salaries.

The Oilers’ senior hockey and business executives decided last week they would forgo 50 to 100 per cent of their compensation during the crisis.