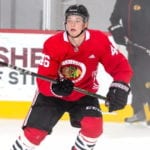 Darren Dreger: The Toronto Maple Leafs are among the at least 20 teams who have reached out to Alexander Barabanov’s agent Dan Milstein this season.

There is no guarantee that Barabanov is making the jump to the NHL next season. They are going to start having interviews with teams starting early this week.

Lance Hornby: The 25-year old Barabanov has scored between 10 and 20 goals for St. Petersburg of the KHL for the past four seasons.

Blackhawks and Mitchell looking at options

Scott Powers of The Athletic: The Chicago Blackhawks can now look at signing prospect Ian Mitchell, and on the weekend Mitchell said in a text that: “Yes, all options are on the table.”

Mitchell would love the chance to play in the 2019-20 season if it gets underway.

He’s eligible to sign a three-year entry-level deal because of his age, and if he were able to get into some NHL games this season, he could burn a year off his contract.

“Right now we are waiting to see what happens with the NHL season,” the 21-year-old Mitchell wrote. “There is a freeze on contracts being signed for this season. If I were to sign a contract now, I wouldn’t be able to play this year if the season resumes. So right now it is just wait and see.”

Teams are not able to file current year contracts as of yet, as Bill Daly’s clarification to Jeremy Rutherford.

The Blackhawks had wanted to sign Mitchell last year. Mitchell’s only leverage would be to return to school next year for his final season and then waiting until August 15th 2021 to become a free agent.