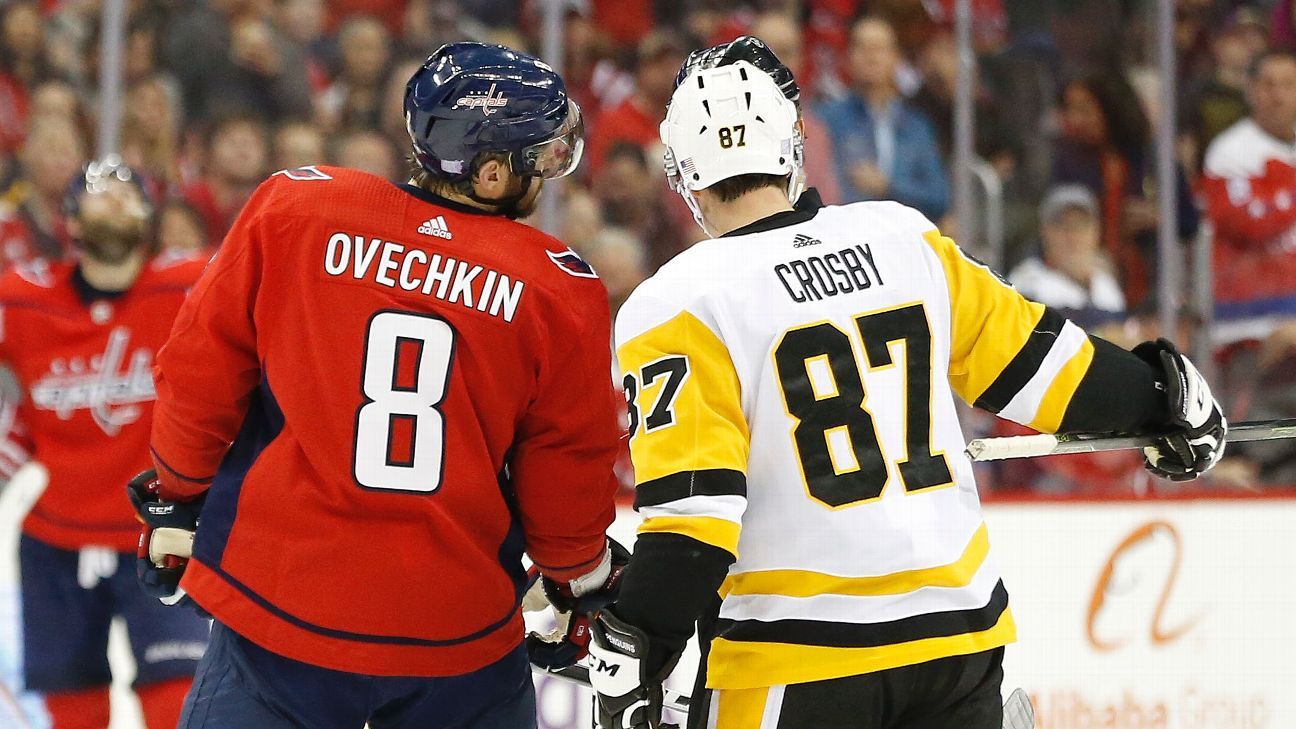 If the NHL were to resume play this season, Alex Ovechkin and Sidney Crosby wouldn’t mind skipping right to the postseason. Of course, it helps that the Capitals and Penguins were in first place and third place in the Metropolitan Division, respectively, when the NHL paused play on March 12.

“I’d rather start the playoffs right away,” Ovechkin said on a video call with reporters on Thursday. “Sorry guys.”

Crosby said he would like to “get in as many games as you can.”

“But I wouldn’t mind starting right in the playoffs,” Crosby said. “I think there are a lot of guys in different situations. The more games you can play, the better — when it comes to the integrity of everything, that’s a big part of it.”

The NHL is modeling several different options on how they could complete the season, and have now told teams to look into building availability through August. On Wednesday, the NHL’s chief medical officer, Dr. Willem Meeuwisse cautioned against the NHL returning to play too soon, and said it is “very difficult to predict” a time-frame at this point.

“We’d need to have some knowledge and confidence around the trajectory of the disease,” Meeuwisse said. “Because if it’s on a trajectory of getting worse and worse, it makes a lot less sense getting people together.”

The players know deciding a return-to-play format that is fair is not going to be easy, especially with a potential time squeeze.

“It’s hard,” Ovechkin admitted. “First of all, we don’t know when this coronavirus is going to end. We have 13 games left until the playoffs. For us, it’s better if playoffs start right now. We don’t want to play that extra games, but I know for different guys who fight for playoff spot — and we’re still fighting for playoff spot — some guys want extra games. For me, of course, the more games we will play it will be better for fans and better for teams who are fighting for playoffs.”

Columbus Blue Jackets captain Nick Foligno noted that players like Ovechkin have logged a lot of miles in the postseason the last few years. He cautioned against extending the season too late into the summer, with a quick turnaround. NHL commissioner Gary Bettman has reiterated that he doesn’t want to do anything that would compromise having a normal 2020-21 season.

“We have to think about the health and safety of our star players,” Foligno said. “When you’re playing that many games a year, and now we’re trying to push it that late in the summer, and then possibly right into another season and then postseason again for a lot of guys, that’s a lot of games in one year that we’re not used to. I’m not saying that guys won’t grind out a way to do it, because us hockey players will find a way, but you have to think about the longevity of guys’ careers and their health.”

Foligno told ESPN earlier this week that he doesn’t think it makes “a ton of sense for us to play into August,” citing it as “pretty dangerous coming into another season.”

Foligno has been on dozens of calls with the NHLPA since the pause. “I think guys have been honest throwing out ideas,” he said. “And any idea is worth it at this point. But we really have to think about how we go ahead here, smartly, both on the business side and the hockey side. And for the fans as well. We want to give them the best product every time we step on the ice.”

NHL players were initially told to self-quarantine through Friday, though the NHL has extended that to April 4.

“That’s a meaningless date really at this point in time,” NHL deputy commissioner Bill Daly said. “As we get closer to the date, we’re going to have to make decisions as to what to do then. We’re biting this off in chunks.” Meeuwisse on Wednesday stressed the importance of players maintaining their conditioning, while noting that it is “difficult to do” in these circumstances.

Crosby said most of his workouts these days revolve around a stationary bike at his home in Pittsburgh. “It’s kind of old school,” the Penguins captain said. “At this point, whatever you can get done, you get done. So that’s what I’ve been doing.”

Islanders forward Anders Lee ordered a Peleton bike for his apartment a few days ago. Devils defenseman PK Subban and fiance Lindsay Vonn returned to their home in Los Angeles, where Subban says he has a better home gym. Foligno does workouts with his personal trainer over the video platform Zoom.

Ovechkin is fortunate. Typically, his trainer Pavel Burlachenko, flies to Washington D.C. for training camp and again, right before the playoffs. Burlachenko is with Ovechkin now and they conduct workouts at Ovechkin’s home gym.

“We just go run on the street, play some soccer, ride the bike, just try to get busy,” Ovechkin said. “I’m lucky enough to have my trainer with me, and he’s helped me out a lot obviously. Because you get used to being with the team and working out with the team all year, and right now you’re by yourself so it’s kind of hard to push yourself to that mode…. Sometimes I don’t want to do it, but he says, ‘Let’s go.'”

When he’s not working out, Ovechkin has been teaching his son, Sergei, how to take slapshots in the backyard, and watching “Deal or No Deal.” Crosby said he has binged the Netflix show “Formula 1: Drive to Survive.”

Asked if he had advice for young hockey players stuck at home, Crosby said: “I just shot pucks, that’s pretty much it… It’s a good way to pass the time. They have lots of time to do it, there’s no excuse now. Just have fun with it, and be creative.”