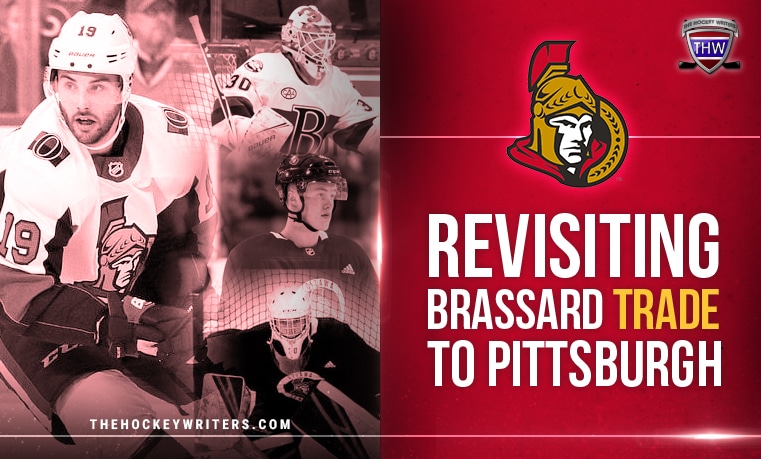 When the New York Rangers traded Derick Brassard to the Ottawa Senators for Mika Zibanajad on July 18, 2016, the questionable move was deemed an early success when the Senators reached the Eastern Conference Final in 2017. After the Sens lost that series in seven games to the Pittsburgh Penguins, the team went into a tailspin from which they have not yet recovered.

Watching Zibanajad flourish with the Rangers adds salt to the wound of what has turned out to be one of general manager Pierre Dorian’s worst moves. However, Pittsburgh may have dealt Ottawa a critical blow on May 5, 2017, but the Sens made a retaliatory strike on Feb. 23, 2018.

Brassard was disappointing as a Senator. With only 77 points in 139 games, he didn’t live up to his play in New York. While his possession numbers were impressive, he wasn’t scoring at the same rate. Granted, he wasn’t in Ottawa long enough for a fair sample size.

In the 2017-18 season, he started to turn it around. He surpassed his previous season’s point totals in fewer games and looked much better overall. However, the Sens saw the writing on the wall and shipped him off. At the time he was traded, he was an excellent playoff performer averaging .70 points per game in his career.

Before the Brassard trade, Ottawa was in the middle of a rock-bottom 2017-18 season. After their trip to the Conference Finals, the Sens began to unload their veterans and depth players. Feeling that he was not a part of their future plans, they shipped him to Pittsburgh.

When Brassard was traded to the Penguins, it was considered Dorian’s way of admitting defeat in the Zibanajad deal. The package Ottawa received was at the time, seen as a good haul by many experts and analysts. However, the toxic environment surrounding the team, management, and ownership during the 2017-18 season clouded the judgment of many fans and their views of the deal.

Fans were not thrilled about letting Brassard go, and would not see the fruits of the trade until much later. When they saw the quality of prospects that Ottawa had, the narrative of the trade quickly changed.

The big pieces in this deal were the draft picks and Gustavsson, currently projected to be the Senators’ goalie of the future. The Penguins selected him 55th overall in 2016 from Lulea HF out of the Swedish Hockey League (SHL). He was a significant and hyped prospect in the Penguins organization.

The 21-year-old Swede is playing for the Senators’ AHL affiliate in Belleville after a successful career in the SHL. He was also part of Team Sweden that won a silver medal 2018 World Junior Championships (WJHC), where he was named the tournament’s best goaltender. While he has struggled with the Belleville Senators, he still has the potential to be an NHL starter.

The first-round pick that the Sens acquired turned out to be 26th overall. With the selection, they chose Jacob Bernard-Docker, a defenseman who played for the Okotoks Oilers of the Alberta Junior Hockey League. It was an odd selection considering that Bernard-Docker was ranked as a second-rounder by the majority of scouts, except for the International Scouting Services. However, the Senators made the right choice.

After committing to the University of North Dakota, Bernard-Docker showcased why he was drafted in the first round. Through two seasons, he has 42 points in 68 games. He may not be the puck-moving defenseman that the modern NHL has fallen in love with, but he is a stabilizing presence on the North Dakota blue line.

Bernard-Docker stood out during Team Canada’s run to the gold medal in the 2020 WJHC. He didn’t flourish on the scoresheet, but his performance was instrumental in winning gold. His story is even better when you consider the heartbreak of being cut from Team Canada in 2019.

With his recent success, he has become one of the Senators’ most intriguing prospects.

The third round-pick that Ottawa received from the Golden Knights, 83rd overall, was packaged in a trade with the Senators’ second-round pick, 44th overall, to the Carolina Hurricanes to move up to the 37th pick, where they selected goaltender Mads Søgaard.

The Danish goalie made headlines with the Medicine Hat Tigers of the WHL for his play and giant stature. At 6-foot-7, the 19-year old is still with the Tigers and has represented Denmark at the WJHC. At the time, most scouts had Søgaard ranked as a third-round pick, so trading up to get him seemed odd. Now, Søgaard is one of Ottawa’s top prospects adding to an already deep goalie prospect group.

A Resounding Win For the Senators

Senators fans tend to criticize Dorian and management for their mismanagement of assets. At the same time, we need to credit management when they do the right thing. Overall, the trade that sent Brassard to the Penguins was a success, as it propelled the rebuild and stocked the cupboard; it also started a retooling of the Senators’ prospect system.