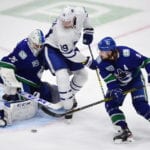 Luke Fox of Sportsnet: Pending free agents may not get the stretch run and playoffs to help boost their stock. The potential flattening of the salary cap won’t help their situation either.

Vancouver Canucks GM Jim Benning on Sportsnet 650 radio again that he intends to try and sign goaltender Jacob Markstrom to a contract extension. Benning added that Markstrom has recovered from his knee injury and is ready to play if the season resumes.

Areas the Toronto Maple Leafs need to find a way to improve on, and pending Leafs free agents

Luke Fox of Sportsnet: Toronto Maple Leafs GM Kyle Dubas takes the responsibility for his team. If they don’t reach their potential, he says it’s on him.

“Whatever the economic landscape is, we will have to adapt and find a way to put the best team possible on the ice as we continue to grow toward our goal of being a perennial contender for the Stanley Cup,” he continued.

“We have a long ways to go, but how we overcome the obstacles along the way will likely be the biggest determinant of whether we get there.”

The Maple Leafs will need to improve on the blue line. Being able to sign a right-handed free agent defenseman like Alex Pietrangelo, Chris Tanev, Travis Hamonic, Justin Schultz, or Radko Gudas won’t be easy, so they may have to look at the trade market.

Right-handed defenseman they Leafs could look at to see if available include Matt Dumba, Rasmus Ristolainen, Colin Miller and Josh Manson.

The Maple Leafs will also need to improve on the penalty kill. They could use an experienced, reliable defensive defenseman and a reliable face-off man.

Dubas traded the Maple Leafs 2020 first- and third-round picks so they’ll hope to be able to hit a home run with their second-round pick, or find a way to trade back into the first round.

Veterans Kyle Clifford and Jason Spezza are pending free agents. Will the Leafs be able to re-sign them at reasonable prices? Spezza wants to keep playing.

The Maple Leafs need to re-sign pending RFAs in Ilya Mikheyev and Travis Dermott. Can they get them re-signed at a reasonable price?

Frederik Andersen and Zach Hyman are eligible to sign a contract extension after July 1st, but those talks will likely be pushed back.