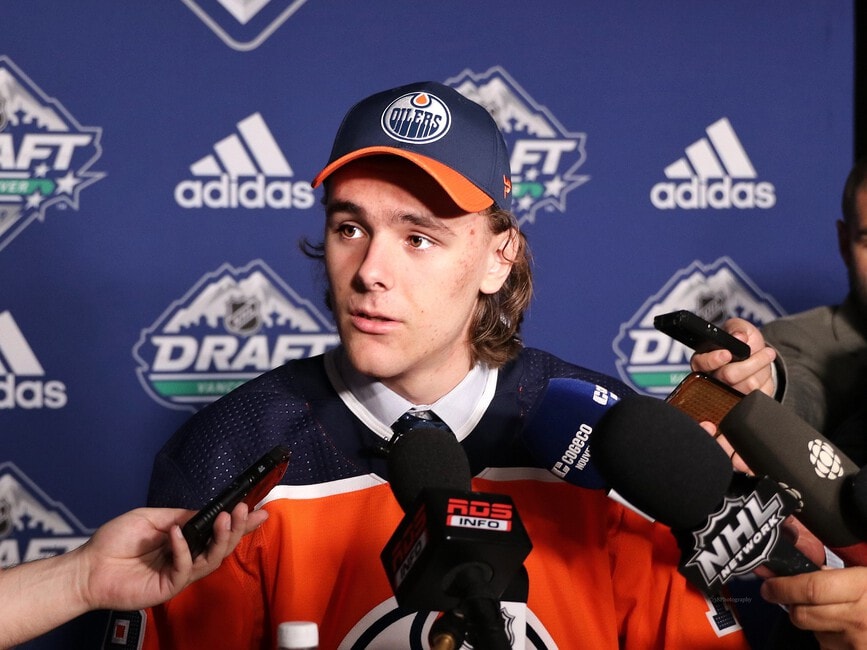 In today’s NHL rumor rundown, there is news on the Vegas Golden Knights talking to one of their 2017 draft picks about an extension, while the Edmonton Oilers did sign a draft pick of their own. Where will he play? Finally, if the NHL goes with compliance buyouts, who are the early candidates?

David Schoen of RJ Sports writes that Vegas Golden Knights GM Kelly McCrimmon is working on getting down to business when it comes to prospect Jack Dugan. He quotes McCrimmon who said, “We’ll have discussions with his representatives here at an appropriate point. It hasn’t been pressing because there’s no hockey being played. But those are conversations we’ll have here as we move along.”

Dugan was drafted 142nd in the fifth round of the 2017 draft and has spent the previous two seasons playing at Providence College. He had an impressive rookie season, posting 10 goals and 39 points in 41 games and followed that up with a much more dominant sophomore campaign, scoring 10 goals and 52 points in just 34 games.

He was named a Hobey Baker Award top-10 finalist and, as PC Men’s Hockey points out, in 14 games against opponents that finished in the top-20 of the Pairwise rankings, Dugan recorded six goals and 16 assists.

According to the Edmonton Journal’s Jim Matheson, newly signed prospect Raphael Lavoie will be suiting up for Bakersfield next season, the Oilers’ AHL team. Lavoie signed a three-year contract for $2.6 million Saturday, with a $92,000 signing bonus.

Lavoie, who is in his fourth year playing junior with 82 points in 55 games — spending the first half of the season with Halifax before he was traded to Chicoutimi for four draft picks — will likely be in Bakersfield next season as a rookie pro. He’s got terrific tools with soft hands and an NHL frame at six-foot-four, 198 pounds, with things to work on like most juniors, unless your name is Connor McDavid.

The Oilers will work Lavoie into their forward prospect pool which is strong but could use extra help, while their defense is coming along nicely.

GM Ken Holland has noted the Oilers have no intention to rush their prospects, and the 6’4, 205 lb. power-forward will get a chance to work on aspects of his game that will make him a strong NHL player. Scott Howson, the Oilers head of player development, said of Lavoie:

“He needs to get stronger and more powerful and his skating needs to improve. He’ll need to become a better two-way player, but I thought his world junior experience helped him in that area as he wasn’t necessarily relied on to produce offence. He needed to be a good two-way player. He rose to that challenge.”

We previously reported on speculation that the NHL might bring back compliance buyouts to help allieviate some of the financial burden being felt by the coronavirus outbreak that has caused the NHL to shut things down. If the league does go that route, there are rumblings about who might be considered early candidates for a buyout.

Staples adds, when talking about what teams will look at when making that decision:

That will come down to numerous factors, with perhaps the most important factor being the willingness and ability of a team owner to pay out a buyout, then replace that salary on the team. Given the financial hit folks are taking right now, some owners may not be willing to do so.