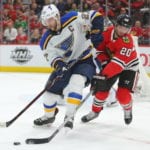 The National Hockey League schedule may be paused by the COVID-19 pandemic, but that hasn’t stopped speculation over possible off-season free-agent moves and trade candidates. Here’s a look at the past week’s notable chatter.

Blackhawks could shed salary this summer

With over $73 million invested in 17 players, the Blackhawks will be squeezed if the cap remains at $81.5 million next season. Long-time starting goalie Corey Crawford becomes an unrestricted free agent this summer, while their restricted free agents include Dylan Strome and 30-goal rookie winger Dominik Kubalik.

In another column examining the Blackhawks’ cap situation, Pope observed they could get some cap relief if frequently-concussed winger Andrew Shaw ($3.9 million AAV) remained on long-term injury reserve. He also suggested buying out defenseman Olli Maatta and center Zack Smith would save them a combined cap hit of $5.5 million, but they would have to be replaced on the roster.

Pope didn’t mention trading Brandon Saad, but the 27-year-old surfaced in the rumor mill before last month’s NHL trade deadline. He has a year remaining on his contract with an AVV of $6 million and lacks no-trade protection.

Saad was a salary-cap casualty when the Hawks shipped him to the Columbus Blue Jackets in 2015. He could become one again.

Has Lundqvist played his final game as a Ranger?

The pause to the schedule prompted The Athletic’s Rick Carpiniello to ponder Henrik Lundqvist‘s future with the New York Rangers. The long-time Blueshirts starting goalie was shunted aside this season in favor of Igor Shesterkin and Alexandar Georgiev.

Lundqvist, 38, has a year remaining on his contract with an annual average value of $8.5 million. If he agrees to waive his no-movement clause, the Rangers could be forced to absorb part of his cap hit to facilitate a trade. A contract buyout is also possible. Either way, Carpiniello felt the Rangers would be carrying some dead cap space next season.

There’s some speculation of amnesty buyouts if the salary cap remains at $81.5 million next season. If so, Lundqvist will become a prime candidate.

Latest on the Blues

In a recent live chat with his readers, Tom Timmermann of the St. Louis Post-Dispatch was asked if it would be worthwhile for the Blues to re-sign Alex Pietrangelo to a six-year deal worth between $8.5 million and $9 million. The 30-year-old Blues captain is eligible for UFA status this summer. He’d be the best defenseman available if he tests the open market.

With over $73 million tied up in 17 players, the Blues have limited cap space to re-sign Pietrangelo. However, Timmerman felt re-signing Pietrangelo to be worth it because the Blues’ championship window remains wide open.

Nevertheless, he wondered if the Tampa Bay Lightning and Vegas Golden Knights would be among the clubs getting into the bidding if the long-time Blues rearguard becomes a free agent.

The Lightning has over $76 million invested in 15 players for 2020-21, while the Golden Knights are paying out almost $72 million for 13 players. They can’t afford a bidding war for Pietrangelo’s services, especially if the salary cap remains flat. A Cup contender with more cap room, like the Colorado Avalanche, would be more of a threat.