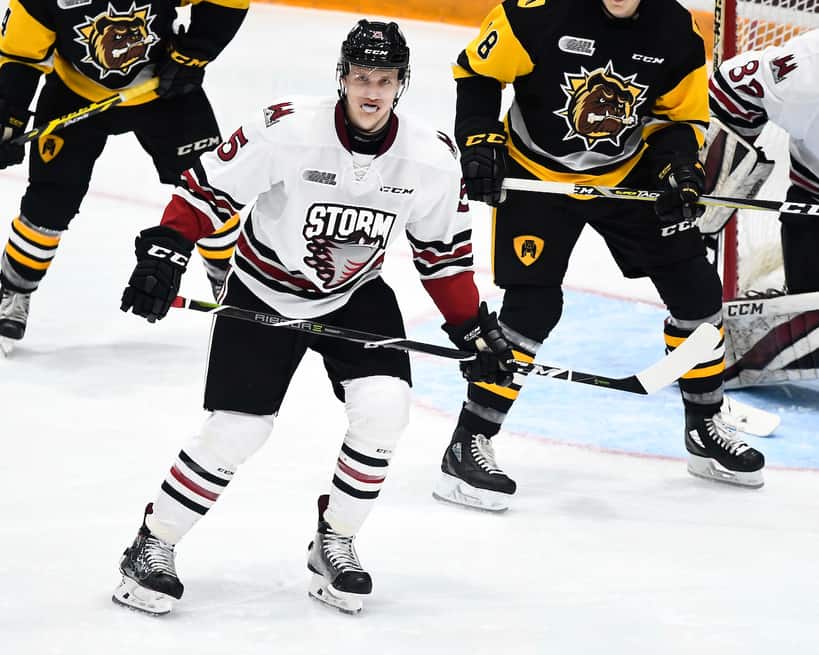 The Edmonton Oilers are going to be busy come deadline day. With injuries to both Connor McDavid and Oscar Klefbom, the team will have to make some moves to secure their position atop the Pacific Division. Could their buyer status shake loose a few prospects in the pipeline to some lower teams looking to offload veteran talent? I think so.

The prospect pool in Edmonton has never been more crowded as the team is finally taking advantage of young talent such as Ethan Bear and Kailer Yamamoto. The emergence of some of these players may have made some other prospects in the system expendable as the Oilers look to load up for a playoff run. Who could these players be? Well, let’s take a look.

The Oilers have a treasure trove of defensive prospects piling up in their system. At the very top of the pile are first-round picks in the last two drafts, Evan Bouchard and Philip Broberg, who both project to be top-four NHL defensemen at the very least. Add that to impressive rookie campaigns by Bear and Caleb Jones there seems to be very little room for a guy like Dmitri Samorukov to progress into an NHL regular with the Oilers.

Samorukov found his way to the Oilers organization after being drafted 84th overall in the 2017 NHL Draft. He put up a respectable 34 points with the Guelph Storm in his draft year but exploded in the 2018-19 season. After increasing his offensive totals to 45 points in the regular season he went on an absolute tear in the OHL playoffs, notching 28 points in 24 games.

His offensive production was very nice to see, but it hasn’t transferred to the pro level just yet. In 41 AHL games with the Bakersfield Condors, he has produced only eight points. It may seem like a disappointing number but that is largely due to a crowded blue line and him being a rookie. Most of his time has been spent playing on the third pair with players such as Logan Day and Jake Kulevich.

@Keyantonyo on Twitter (a very good source for all things Condors) was able to give a great scouting report on Samorukov’s first professional season to date.

If there is a green light with regards to pinching, jumping up and walking on/in from the offensive blue line, Samorukov has it. He appears to rookie out in the defensive zone (leave the slot vacant/miss checks or double up) or get turned around by some of the quicker AHL forwards – typically off of positioning errors more than skating deficiency

This is pretty standard as far as young defencemen go so it shouldn’t shock anyone that Samorukov isn’t producing at the insane pace he was near the end of his junior career.

With all this being said I do believe that NHL teams would have an interest in adding a guy like Samorukov to their prospect pipeline. He demonstrates great offensive instincts and could possibly blossom into a fine NHL defender once he is able to minimize his faults in the defensive zone.

Next up is Cooper Marody, a sixth-round draft pick of the Philadelphia Flyers in 2015, who was traded to the Oilers in March 2018 in exchange for a 2019 third-round draft pick.

At the time of the deal, Marody was described as being an above-average skater with great playmaking ability, but lacked size and often struggled to work the puck along the boards. He had been enjoying a breakout season in the NCAA having put up 46 points in 36 games at the time.

Marody made the jump to the AHL in the 2018-19 season with the Bakersfield Condors and he showed a lot of promise. At the age of 21, Marody put an impressive 64 points in his first season of professional hockey, good enough for second on the team in points. This performance would earn him a brief six-game stint with the Oilers where he was unable to pick up any points.

Heading into the 2019-20 season many expected Marody to push hard for a spot on the Oilers roster. However, he failed to impress in training camp and found himself assigned to Bakersfield rather early on. He has since played in 30 games with the Condors this season, putting up only 17 points in the process. Injuries might play a role in why his production is down from last season but his opportunity to progress through to the NHL ranks is becoming slim.

With players like Yamamoto, Tyler Benson, Patrick Russell and Colby Cave all getting the call up to the big team before Marody, it seems like his time with the organization could soon be coming to a close. Marody still possesses some offensive talent that could be valuable to a team looking to add to their forward depth but I don’t think his value is the same as it was when the Oilers initially acquired him.

The last prospect that could potentially be on the move at the deadline is Kirill Maksimov. The Moscow native was taken 146th overall by the Oilers in the 2017 Draft and has looked good since.

One of the most pure offensive scorers within the Oilers prospect pool right now, Maksimov might prove to be a fascinating gamble for teams looking to trade with Ken Holland. His last two junior seasons spent with the OHL’s Niagara IceDogs stand out as high points in his career to date, scoring 80 points during the 2017-18 season and 79 points in the 2018-19 season.

He made the jump to the AHL this season and, while the production isn’t quite as impressive, he remains one of the more interesting players on the Condors. Maksimov has 13 points in 47 games with the Condors but, as a rookie, there is still plenty of hope that he can recapture that offensive streak as he gets more accustomed to the pro game.

While the Oilers lack pure scoring skill in their prospect pipeline, they could definitely dangle Maksimov if the return helps them acquire a more established scoring forward. Also, like Marody, the road to the NHL might be tough for Maksimov given the amount of young players currently ahead of him on the depth chart.

At the ripe young age of 20, there is still plenty of time for Maksimov to blossom into an NHL forward. He is an attractive low-risk high-reward type of prospect that a rebuilding team could value when shedding assets.

Every trade deadline there is always two types of deals that get made. The first of which is the traditional hockey trade where two teams swap NHL players. The second type, and most common, involves contending teams trading picks and prospects to rebuilding teams in exchange for pending UFA players or more established NHLers. I believe the Oilers will be looking to make either one of these trades but the latter is probably the more likely option.

Newfound depth at the forward and defensive position has pushed prospects like Samorukov, Marody and Maksimov down the depth chart. This could open up a variety of trade opportunities that could help Edmonton contend sooner rather than later.

Get the latest 2020 NHL Trade Deadline news, rumors and analysis