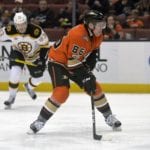 The Anaheim Ducks have traded forward Ondrej Kase to the  Boston Bruins for a 2020 1st round pick, forward David Backes, and defenseman prospect Axel Andersson.

The Bruins are retaining 25 percent of Backes’ salary.

The 35-year old Backes was drafted 62nd overall in the 2nd round of the 2003 draft by the St. Louis Blues. He carries a $6 million salary cap hit for one more year.

Thoughts from the media

Joe Haggerty: “Bruins land Anaheim forward Ondrej Kase for a first round pick, David Backes and former 2nd round pick Axel Andersson. First rounder is cost of doing business to unload the Backes contract and land Kase. I wouldn’t call him a top-6 winger though.”

Jonathan Willis: “I kinda like this for Boston. They’re giving up a comparable package for a somewhat lesser player (as compared to Coleman or Zucker), but dumping a major cap headache in the bargain.”

Matthew Barnaby: “Love love the move by Boston getting KASE… I think he is so underrated. Great get”

Todd Cordell: “yeah, Kase’s injury history is a little concerning but he’s 24, his rate stats are awesome, and he drives play. exactly the kind of guy to use an asset or two from the warchest on.”

Charlie O’Connor: “I love Ondrej Kase’s game as much as every analytics-friendly person does, but any analysis of him and this trade without noting his very real injury concerns/issues is incomplete.”

Dom Luszczyszyn: “the perfection line is already scary enough debrusk – krejci – kase is a terrifying second line on top of that now”

Evan Marinofsky: “Ondrej Kase’s numbers this season: 7 goals & 16 assists in 49 games. Ranks No. 1 on the Ducks in Corsi-For Percentage this season at 54.66 percent. Could see him fitting well on David Krejci’s right side or if they made another move, next to Charlie Coyle.”

A healthy Kase would be at the level of the Charlie Coyle trade in terms of making the #NHLBruins stronger. Surprised Anaheim would do this. #tradecentre #tradedeadline https://t.co/8jzhdj7Tiu pic.twitter.com/Ae3tpuZx5g