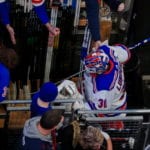 Top teams in on Kreider are… Could the Rangers consider a Lundqvist buyout this offseason?

Matt Porter: Understanding that New York Rangers are getting the most interest in Chris Kreider from the Boston Bruins, Colorado Avalanche and St. Louis Blues.

Larry Brooks: As of Tuesday afternoon no team has asked the New York Rangers about goaltender Henrik Lundqvist.

Unless there a change, it’s likely the Rangers go with three goaltenders past the deadline.

Larry Brooks of the New York Post: The New York Rangers see Igor Shesterkin and Alexandar Georgiev giving them the best chance to win. That leaves Henrik Lundqvist on the outside looking in. Management and the coaching are talking to Lundqvist on an ongoing basis

Could the Rangers buy him out after the season?

Would a team come calling for Lundqvist before the trade deadline? It seems unlikely. It also is doubtful that a team would offer up a top-six forward or a first-round pick for Georgiev.

Buying out Lundqvist after the season would save the Rangers $3 million of the salary cap next season, but Georgiev could take up $2 million of that on his next deal.

The Rangers don’t appear to be in a rush to move Anthony DeAngelo. If they are blown away with an offer, they could consider the move. If the Rangers trade Chris Kreider, it would likely mean a DeAngelo extension.

Canadiens to speak with Ilya Kovalchuk‘s camp later this week

Pierre LeBrun of The Athletic: Have to bet the Montreal Canadiens are thinking that Ilya Kovalchuk is worth at least a second-round pick now, maybe lower.

Canadiens GM Marc Bergervin is expected to speak with agent J.P. Barry before the end of this week. There has been ongoing dialogue between the two sides. Does Kovalchuk want to play another year in Montreal, and if so, at what price?

If Bergevin doesn’t see that an extension can be worked out, they’ll look to move him.

Before he signed with the Canadiens, believes he wanted to sign with the Boston Bruins. The Bruins did speak with Barry, but they weren’t ready to commit to him back in early January.